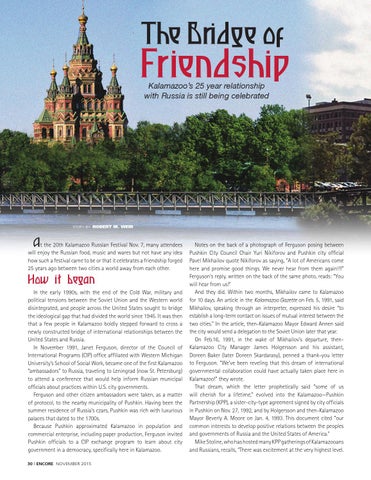 At the 20th Kalamazoo Russian Festival Nov. 7, many attendees will enjoy the Russian food, music and wares but not have any idea how such a festival came to be or that it celebrates a friendship forged 25 years ago between two cities a world away from each other.

How it began In the early 1990s, with the end of the Cold War, military and political tensions between the Soviet Union and the Western world disintegrated, and people across the United States sought to bridge the ideological gap that had divided the world since 1945. It was then that a few people in Kalamazoo boldly stepped forward to cross a newly constructed bridge of international relationships between the United States and Russia. In November 1991, Janet Ferguson, director of the Council of International Programs (CIP) office affiliated with Western Michigan University’s School of Social Work, became one of the first Kalamazoo “ambassadors” to Russia, traveling to Leningrad (now St. Petersburg) to attend a conference that would help inform Russian municipal officials about practices within U.S. city governments. Ferguson and other citizen ambassadors were taken, as a matter of protocol, to the nearby municipality of Pushkin. Having been the summer residence of Russia’s czars, Pushkin was rich with luxurious palaces that dated to the 1700s. Because Pushkin approximated Kalamazoo in population and commercial enterprise, including paper production, Ferguson invited Pushkin officials to a CIP exchange program to learn about city government in a democracy, specifically here in Kalamazoo. 30 | Encore NOVEMBER 2015

Notes on the back of a photograph of Ferguson posing between Pushkin City Council Chair Yuri Nikiforov and Pushkin city official Pavel Mikhailov quote Nikiforov as saying, “A lot of Americans come here and promise good things. We never hear from them again!!!” Ferguson’s reply, written on the back of the same photo, reads: “You will hear from us!” And they did. Within two months, Mikhailov came to Kalamazoo for 10 days. An article in the Kalamazoo Gazette on Feb. 5, 1991, said Mikhailov, speaking through an interpreter, expressed his desire “to establish a long-term contact on issues of mutual interest between the two cities.” In the article, then-Kalamazoo Mayor Edward Annen said the city would send a delegation to the Soviet Union later that year. On Feb.16, 1991, in the wake of Mikhailov’s departure, thenKalamazoo City Manager James Holgersson and his assistant, Doreen Baker (later Doreen Skardarasy), penned a thank-you letter to Ferguson. “We’ve been reveling that this dream of international governmental collaboration could have actually taken place here in Kalamazoo!” they wrote. That dream, which the letter prophetically said “some of us will cherish for a lifetime,” evolved into the Kalamazoo—Pushkin Partnership (KPP), a sister-city-type agreement signed by city officials in Pushkin on Nov. 27, 1992, and by Holgersson and then-Kalamazoo Mayor Beverly A. Moore on Jan. 4, 1993. This document cited “our common interests to develop positive relations between the peoples and governments of Russia and the United States of America.” Mike Stoline, who has hosted many KPP gatherings of Kalamazooans and Russians, recalls, “There was excitement at the very highest level.