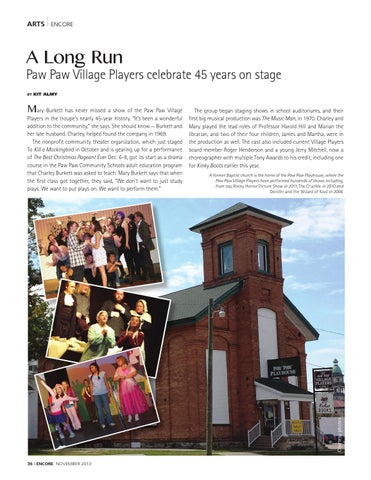 The group began staging shows in school auditoriums, and their first big musical production was The Music Man, in 1970. Charley and Mary played the lead roles of Professor Harold Hill and Marian the librarian, and two of their four children, James and Martha, were in the production as well. The cast also included current Village Players board member Roger Henderson and a young Jerry Mitchell, now a choreographer with multiple Tony Awards to his credit, including one for Kinky Boots earlier this year. A former Baptist church is the home of the Paw Paw Playhouse, where the Paw Paw Village Players have performed hundreds of shows including, from top, Rocky Horror Picture Show in 2011; The Crucible in 2010 and Dorothi and the Wizard of Kozz in 2006.

ary Burkett has never missed a show of the Paw Paw Village Players in the troupe’s nearly 45-year history. “It’s been a wonderful addition to the community,” she says. She should know — Burkett and her late husband, Charley, helped found the company in 1969. The nonprofit community theater organization, which just staged To Kill a Mockingbird in October and is gearing up for a performance of The Best Christmas Pageant Ever Dec. 6-8, got its start as a drama course in the Paw Paw Community Schools adult education program that Charley Burkett was asked to teach. Mary Burkett says that when the first class got together, they said, “We don’t want to just study plays. We want to put plays on. We want to perform them.”

Southwest Michigan's Magazine celebrating the great people, places and things in our corner of the Mitten.