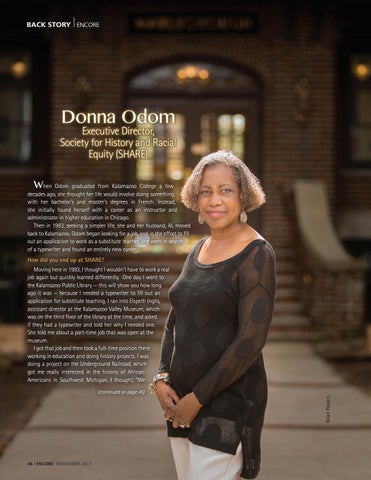 hen Odom graduated from Kalamazoo College a few decades ago, she thought her life would involve doing something with her bachelor’s and master’s degrees in French. Instead, she initially found herself with a career as an instructor and administrator in higher education in Chicago. Then in 1993, seeking a simpler life, she and her husband, Al, moved back to Kalamazoo. Odom began looking for a job, and in the effort to fill out an application to work as a substitute teacher, she went in search of a typewriter and found an entirely new career. How did you end up at SHARE? Moving here in 1993, I thought I wouldn’t have to work a real job again but quickly learned differently. One day I went to the Kalamazoo Public Library — this will show you how long ago it was — because I needed a typewriter to fill out an application for substitute teaching. I ran into Elspeth Inglis, assistant director at the Kalamazoo Valley Museum, which was on the third floor of the library at the time, and asked if they had a typewriter and told her why I needed one. She told me about a part-time job that was open at the museum. I got that job and then took a full-time position there working in education and doing history projects. I was doing a project on the Underground Railroad, which got me really interested in the history of AfricanAmericans in Southwest Michigan. I thought, “We Brian Powers