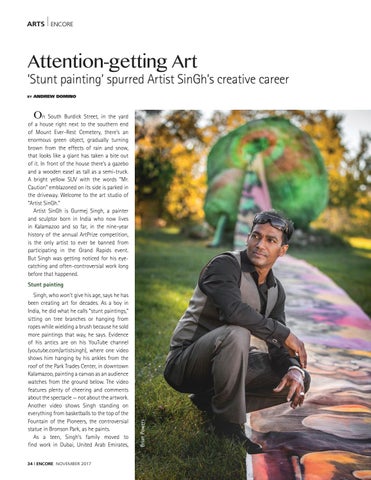 On South Burdick Street, in the yard

of a house right next to the southern end of Mount Ever-Rest Cemetery, there’s an enormous green object, gradually turning brown from the effects of rain and snow, that looks like a giant has taken a bite out of it. In front of the house there’s a gazebo and a wooden easel as tall as a semi-truck. A bright yellow SUV with the words “Mr. Caution” emblazoned on its side is parked in the driveway. Welcome to the art studio of “Artist SinGh.” Artist SinGh is Gurmej Singh, a painter and sculptor born in India who now lives in Kalamazoo and so far, in the nine-year history of the annual ArtPrize competition, is the only artist to ever be banned from participating in the Grand Rapids event. But Singh was getting noticed for his eyecatching and often-controversial work long before that happened.

Singh, who won’t give his age, says he has been creating art for decades. As a boy in India, he did what he calls “stunt paintings,” sitting on tree branches or hanging from ropes while wielding a brush because he sold more paintings that way, he says. Evidence of his antics are on his YouTube channel (youtube.com/artistsingh), where one video shows him hanging by his ankles from the roof of the Park Trades Center, in downtown Kalamazoo, painting a canvas as an audience watches from the ground below. The video features plenty of cheering and comments about the spectacle — not about the artwork. Another video shows Singh standing on everything from basketballs to the top of the Fountain of the Pioneers, the controversial statue in Bronson Park, as he paints. As a teen, Singh’s family moved to find work in Dubai, United Arab Emirates,