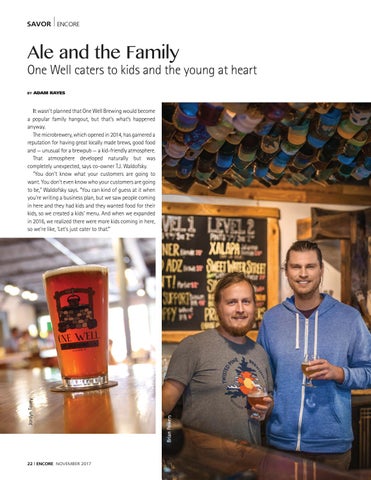 Ale and the Family

One Well caters to kids and the young at heart by

It wasn't planned that One Well Brewing would become a popular family hangout, but that’s what’s happened anyway. The microbrewery, which opened in 2014, has garnered a reputation for having great locally made brews, good food and — unusual for a brewpub — a kid-friendly atmosphere. That atmosphere developed naturally but was completely unexpected, says co-owner T.J. Waldofsky. "You don't know what your customers are going to want. You don't even know who your customers are going to be,” Waldofsky says. “You can kind of guess at it when you're writing a business plan, but we saw people coming in here and they had kids and they wanted food for their kids, so we created a kids’ menu. And when we expanded in 2016, we realized there were more kids coming in here, so we're like, ‘Let's just cater to that.’"