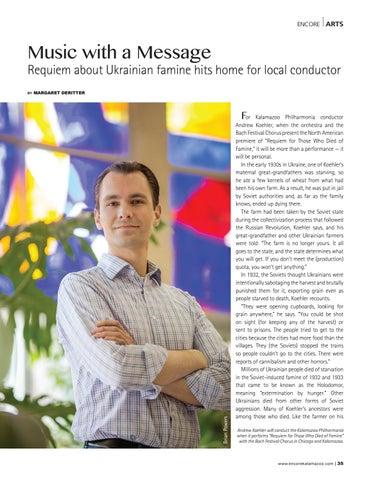 Music with a Message

Requiem about Ukrainian famine hits home for local conductor by

or Kalamazoo Philharmonia conductor Andrew Koehler, when the orchestra and the Bach Festival Chorus present the North American premiere of “Requiem for Those Who Died of Famine,” it will be more than a performance — it will be personal. In the early 1930s in Ukraine, one of Koehler’s maternal great-grandfathers was starving, so he ate a few kernels of wheat from what had been his own farm. As a result, he was put in jail by Soviet authorities and, as far as the family knows, ended up dying there. The farm had been taken by the Soviet state during the collectivization process that followed the Russian Revolution, Koehler says, and his great-grandfather and other Ukrainian farmers were told: “The farm is no longer yours. It all goes to the state, and the state determines what you will get. If you don’t meet the (production) quota, you won’t get anything.” In 1932, the Soviets thought Ukrainians were intentionally sabotaging the harvest and brutally punished them for it, exporting grain even as people starved to death, Koehler recounts. “They were opening cupboards, looking for grain anywhere,” he says. “You could be shot on sight (for keeping any of the harvest) or sent to prisons. The people tried to get to the cities because the cities had more food than the villages. They (the Soviets) stopped the trains so people couldn’t go to the cities. There were reports of cannibalism and other horrors.” Millions of Ukrainian people died of starvation in the Soviet-induced famine of 1932 and 1933 that came to be known as the Holodomor, meaning “extermination by hunger.” Other Ukrainians died from other forms of Soviet aggression. Many of Koehler’s ancestors were among those who died. Like the farmer on his Andrew Koehler will conduct the Kalamazoo Philharmonia when it performs “Requiem for Those Who Died of Famine” with the Bach Festival Chorus in Chicago and Kalamazoo.

Southwest Michigan's Magazine: The subversive art of Mary Hatch, para athlete Nicolas Nieboer, why From the Top is coming to the Stulberg Competition, meet KAR's Bonnie Sexton and more!