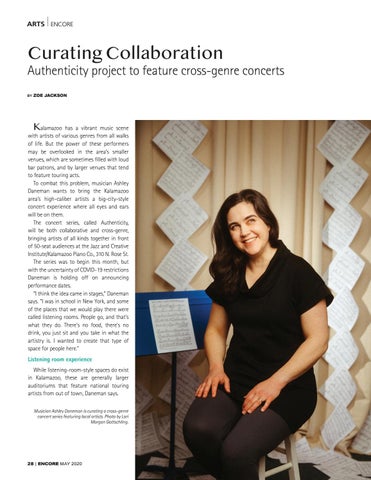 alamazoo has a vibrant music scene with artists of various genres from all walks of life. But the power of these performers may be overlooked in the area’s smaller venues, which are sometimes filled with loud bar patrons, and by larger venues that tend to feature touring acts. To combat this problem, musician Ashley Daneman wants to bring the Kalamazoo area’s high-caliber artists a big-city-style concert experience where all eyes and ears will be on them. The concert series, called Authenticity, will be both collaborative and cross-genre, bringing artists of all kinds together in front of 50-seat audiences at the Jazz and Creative Institute/Kalamazoo Piano Co., 310 N. Rose St. The series was to begin this month, but with the uncertainty of COVID-19 restrictions Daneman is holding off on announcing performance dates. “I think the idea came in stages,” Daneman says. “I was in school in New York, and some of the places that we would play there were called listening rooms. People go, and that&#39;s what they do. There&#39;s no food, there&#39;s no drink, you just sit and you take in what the artistry is. I wanted to create that type of space for people here.” Listening room experience While listening-room-style spaces do exist in Kalamazoo, these are generally larger auditoriums that feature national touring artists from out of town, Daneman says. Musician Ashley Daneman is curating a cross-genre concert series featuring local artists. Photo by Lori Morgan Gottschling.