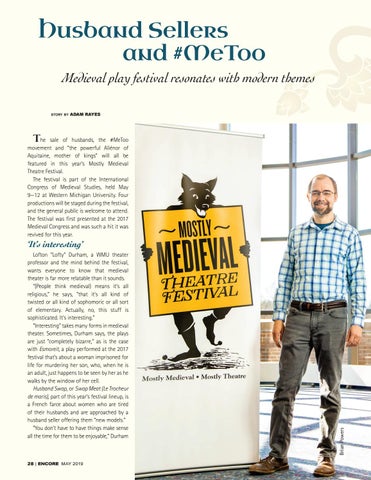 he sale of husbands, the #MeToo movement and “the powerful Aliénor of Aquitaine, mother of kings” will all be featured in this year’s Mostly Medieval Theatre Festival. The festival is part of the International Congress of Medieval Studies, held May 9—12 at Western Michigan University. Four productions will be staged during the festival, and the general public is welcome to attend. The festival was first presented at the 2017 Medieval Congress and was such a hit it was revived for this year. Lofton “Lofty” Durham, a WMU theater professor and the mind behind the festival, wants everyone to know that medieval theater is far more relatable than it sounds. “(People think medieval) means it&#39;s all religious,” he says, “that it&#39;s all kind of twisted or all kind of sophomoric or all sort of elementary. Actually, no, this stuff is sophisticated. It&#39;s interesting.” “Interesting” takes many forms in medieval theater. Sometimes, Durham says, the plays are just “completely bizarre,” as is the case with Esmoreit, a play performed at the 2017 festival that’s about a woman imprisoned for life for murdering her son, who, when he is an adult, just happens to be seen by her as he walks by the window of her cell. Husband Swap, or Swap Meat (Le Trocheur de maris), part of this year’s festival lineup, is a French farce about women who are tired of their husbands and are approached by a husband seller offering them “new models.” “You don&#39;t have to have things make sense all the time for them to be enjoyable,” Durham