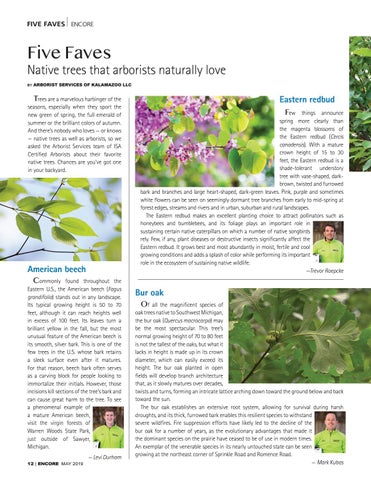 Trees are a marvelous harbinger of the seasons, especially when they sport the new green of spring, the full emerald of summer or the brilliant colors of autumn. And there’s nobody who loves — or knows — native trees as well as arborists, so we asked the Arborist Services team of ISA Certified Arborists about their favorite native trees. Chances are you’ve got one in your backyard.

found throughout the Eastern U.S., the American beech (Fagus grandifolia) stands out in any landscape. Its typical growing height is 50 to 70 feet, although it can reach heights well in excess of 100 feet. Its leaves turn a brilliant yellow in the fall, but the most unusual feature of the American beech is its smooth, silver bark. This is one of the few trees in the U.S. whose bark retains a sleek surface even after it matures. For that reason, beech bark often serves as a carving block for people looking to immortalize their initials. However, those incisions kill sections of the tree’s bark and can cause great harm to the tree. To see a phenomenal example of a mature American beech, visit the virgin forests of Warren Woods State Park, just outside of Sawyer, Michigan. 12 | ENCORE MAY 2019

Eastern redbud Few things announce spring more clearly than the magenta blossoms of the Eastern redbud (Cercis canadensis). With a mature crown height of 15 to 30 feet, the Eastern redbud is a shade-tolerant understory tree with vase-shaped, darkbrown, twisted and furrowed bark and branches and large heart-shaped, dark-green leaves. Pink, purple and sometimes white flowers can be seen on seemingly dormant tree branches from early to mid-spring at forest edges, streams and rivers and in urban, suburban and rural landscapes. The Eastern redbud makes an excellent planting choice to attract pollinators such as honeybees and bumblebees, and its foliage plays an important role in sustaining certain native caterpillars on which a number of native songbirds rely. Few, if any, plant diseases or destructive insects significantly affect the Eastern redbud. It grows best and most abundantly in moist, fertile and cool growing conditions and adds a splash of color while performing its important role in the ecosystem of sustaining native wildlife. —Trevor Roepcke

Bur oak Of all the magnificent species of oak trees native to Southwest Michigan, the bur oak (Quercus macrocarpa) may be the most spectacular. This tree’s normal growing height of 70 to 80 feet is not the tallest of the oaks, but what it lacks in height is made up in its crown diameter, which can easily exceed its height. The bur oak planted in open fields will develop branch architecture that, as it slowly matures over decades, twists and turns, forming an intricate lattice arching down toward the ground below and back toward the sun. The bur oak establishes an extensive root system, allowing for survival during harsh droughts, and its thick, furrowed bark enables this resilient species to withstand severe wildfires. Fire suppression efforts have likely led to the decline of the bur oak for a number of years, as the evolutionary advantages that made it the dominant species on the prairie have ceased to be of use in modern times. An exemplar of the venerable species in its nearly untouched state can be seen growing at the northeast corner of Sprinkle Road and Romence Road. — Mark Kubas