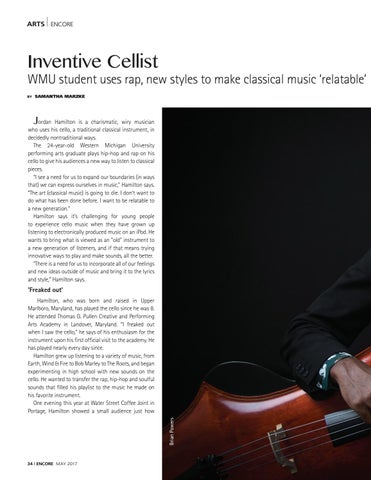 ordan Hamilton is a charismatic, wiry musician who uses his cello, a traditional classical instrument, in decidedly nontraditional ways. The 24-year-old Western Michigan University performing arts graduate plays hip-hop and rap on his cello to give his audiences a new way to listen to classical pieces. “I see a need for us to expand our boundaries (in ways that) we can express ourselves in music,” Hamilton says. “The art (classical music) is going to die. I don’t want to do what has been done before. I want to be relatable to a new generation.” Hamilton says it’s challenging for young people to experience cello music when they have grown up listening to electronically produced music on an iPod. He wants to bring what is viewed as an "old" instrument to a new generation of listeners, and if that means trying innovative ways to play and make sounds, all the better. “There is a need for us to incorporate all of our feelings and new ideas outside of music and bring it to the lyrics and style,” Hamilton says.

Hamilton, who was born and raised in Upper Marlboro, Maryland, has played the cello since he was 8. He attended Thomas G. Pullen Creative and Performing Arts Academy in Landover, Maryland. “I freaked out when I saw the cello,” he says of his enthusiasm for the instrument upon his first official visit to the academy. He has played nearly every day since. Hamilton grew up listening to a variety of music, from Earth, Wind & Fire to Bob Marley to The Roots, and began experimenting in high school with new sounds on the cello. He wanted to transfer the rap, hip-hop and soulful sounds that filled his playlist to the music he made on his favorite instrument. One evening this year at Water Street Coffee Joint in Portage, Hamilton showed a small audience just how