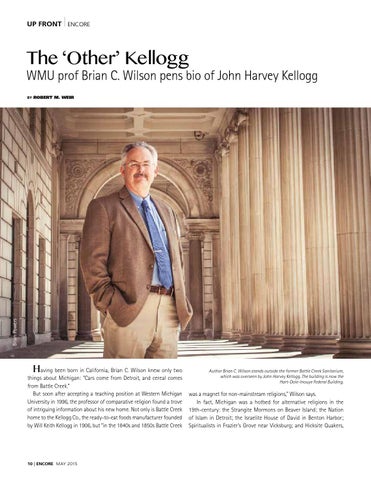 aving been born in California, Brian C. Wilson knew only two things about Michigan: “Cars come from Detroit, and cereal comes from Battle Creek.” But soon after accepting a teaching position at Western Michigan University in 1996, the professor of comparative religion found a trove of intriguing information about his new home. Not only is Battle Creek home to the Kellogg Co., the ready-to-eat foods manufacturer founded by Will Keith Kellogg in 1906, but “in the 1840s and 1850s Battle Creek

Author Brian C. Wilson stands outside the former Battle Creek Sanitarium, which was overseen by John Harvey Kellogg. The building is now the Hart-Dole-Inouye Federal Building.

was a magnet for non-mainstream religions,” Wilson says. In fact, Michigan was a hotbed for alternative religions in the 19th-century: the Strangite Mormons on Beaver Island; the Nation of Islam in Detroit; the Israelite House of David in Benton Harbor; Spiritualists in Frazier’s Grove near Vicksburg; and Hicksite Quakers,