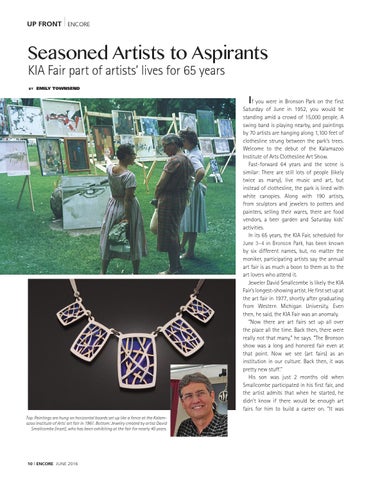 f you were in Bronson Park on the first Saturday of June in 1952, you would be standing amid a crowd of 15,000 people. A swing band is playing nearby, and paintings by 70 artists are hanging along 1,100 feet of clothesline strung between the park’s trees. Welcome to the debut of the Kalamazoo Institute of Arts Clothesline Art Show. Fast-forward 64 years and the scene is similar: There are still lots of people (likely twice as many), live music and art, but instead of clothesline, the park is lined with white canopies. Along with 190 artists, from sculptors and jewelers to potters and painters, selling their wares, there are food vendors, a beer garden and Saturday kids’ activities. In its 65 years, the KIA Fair, scheduled for June 3–4 in Bronson Park, has been known by six different names, but, no matter the moniker, participating artists say the annual art fair is as much a boon to them as to the art lovers who attend it. Jeweler David Smallcombe is likely the KIA Fair’s longest-showing artist. He first set up at the art fair in 1977, shortly after graduating from Western Michigan University. Even then, he said, the KIA Fair was an anomaly. “Now there are art fairs set up all over the place all the time. Back then, there were really not that many,” he says. “The Bronson show was a long and honored fair even at that point. Now we see (art fairs) as an institution in our culture. Back then, it was pretty new stuff.” His son was just 2 months old when Smallcombe participated in his first fair, and the artist admits that when he started, he didn’t know if there would be enough art fairs for him to build a career on. “It was Top: Paintings are hung on horizontal boards set up like a fence at the Kalamazoo Institute of Arts’ art fair in 1961. Bottom: Jewelry created by artist David Smallcombe (inset), who has been exhibiting at the fair for nearly 40 years.