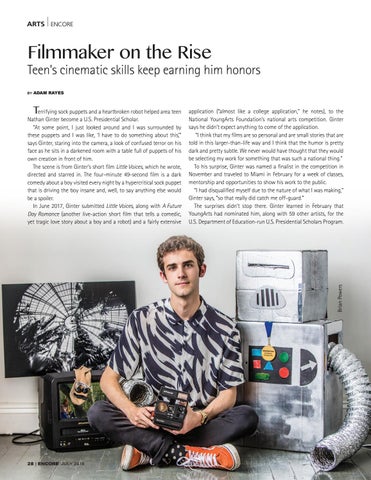 Filmmaker on the Rise

Nathan Ginter become a U.S. Presidential Scholar. “At some point, I just looked around and I was surrounded by these puppets and I was like, ‘I have to do something about this,’” says Ginter, staring into the camera, a look of confused terror on his face as he sits in a darkened room with a table full of puppets of his own creation in front of him. The scene is from Ginter’s short film Little Voices, which he wrote, directed and starred in. The four-minute 49-second film is a dark comedy about a boy visited every night by a hypercritical sock puppet that is driving the boy insane and, well, to say anything else would be a spoiler. In June 2017, Ginter submitted Little Voices, along with A Future Day Romance (another live-action short film that tells a comedic, yet tragic love story about a boy and a robot) and a fairly extensive

application (“almost like a college application,” he notes), to the National YoungArts Foundation’s national arts competition. Ginter says he didn’t expect anything to come of the application. “I think that my films are so personal and are small stories that are told in this larger-than-life way and I think that the humor is pretty dark and pretty subtle. We never would have thought that they would be selecting my work for something that was such a national thing.” To his surprise, Ginter was named a finalist in the competition in November and traveled to Miami in February for a week of classes, mentorship and opportunities to show his work to the public. “I had disqualified myself due to the nature of what I was making,” Ginter says, “so that really did catch me off-guard.” The surprises didn’t stop there. Ginter learned in February that YoungArts had nominated him, along with 59 other artists, for the U.S. Department of Education-run U.S. Presidential Scholars Program.