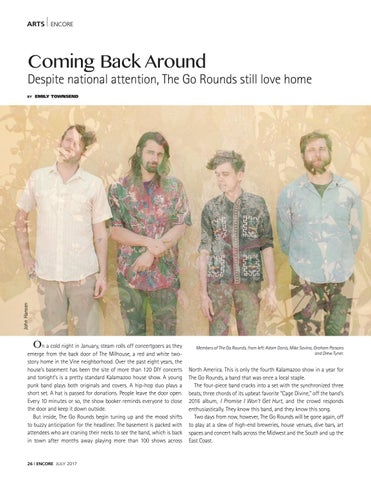 n a cold night in January, steam rolls off concertgoers as they emerge from the back door of The Milhouse, a red and white twostory home in the Vine neighborhood. Over the past eight years, the house’s basement has been the site of more than 120 DIY concerts and tonight’s is a pretty standard Kalamazoo house show. A young punk band plays both originals and covers. A hip-hop duo plays a short set. A hat is passed for donations. People leave the door open. Every 10 minutes or so, the show booker reminds everyone to close the door and keep it down outside. But inside, The Go Rounds begin tuning up and the mood shifts to buzzy anticipation for the headliner. The basement is packed with attendees who are craning their necks to see the band, which is back in town after months away playing more than 100 shows across

North America. This is only the fourth Kalamazoo show in a year for The Go Rounds, a band that was once a local staple. The four-piece band cracks into a set with the synchronized three beats, three chords of its upbeat favorite “Cage Divine,” off the band’s 2016 album, I Promise I Won’t Get Hurt, and the crowd responds enthusiastically. They know this band, and they know this song. Two days from now, however, The Go Rounds will be gone again, off to play at a slew of high-end breweries, house venues, dive bars, art spaces and concert halls across the Midwest and the South and up the East Coast.