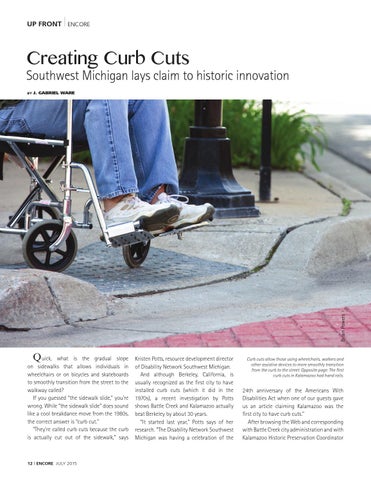 what is the gradual slope on sidewalks that allows individuals in wheelchairs or on bicycles and skateboards to smoothly transition from the street to the walkway called? If you guessed “the sidewalk slide,” you’re wrong. While “the sidewalk slide” does sound like a cool breakdance move from the 1980s, the correct answer is “curb cut.” “They’re called curb cuts because the curb is actually cut out of the sidewalk,” says

Kristen Potts, resource development director of Disability Network Southwest Michigan. And although Berkeley, California, is usually recognized as the first city to have installed curb cuts (which it did in the 1970s), a recent investigation by Potts shows Battle Creek and Kalamazoo actually beat Berkeley by about 30 years. “It started last year,” Potts says of her research. “The Disability Network Southwest Michigan was having a celebration of the

Curb cuts allow those using wheelchairs, walkers and other assistive devices to more smoothly transition from the curb to the street. Opposite page: The first curb cuts in Kalamazoo had hand rails.

24th anniversary of the Americans With Disabilities Act when one of our guests gave us an article claiming Kalamazoo was the first city to have curb cuts.” After browsing the Web and corresponding with Battle Creek city administration and with Kalamazoo Historic Preservation Coordinator