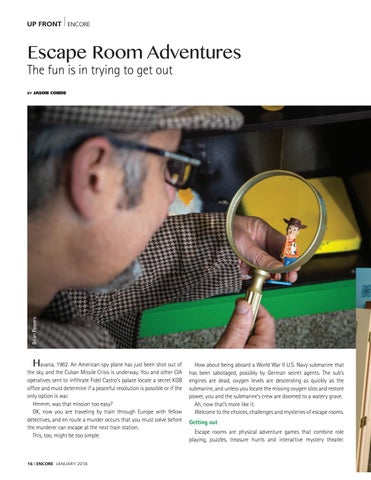 avana, 1962. An American spy plane has just been shot out of the sky, and the Cuban Missile Crisis is underway. You and other CIA operatives sent to infiltrate Fidel Castro’s palace locate a secret KGB office and must determine if a peaceful resolution is possible or if the only option is war. Hmmm, was that mission too easy? OK, now you are traveling by train through Europe with fellow detectives, and en route a murder occurs that you must solve before the murderer can escape at the next train station. This, too, might be too simple.

How about being aboard a World War II U.S. Navy submarine that has been sabotaged, possibly by German secret agents. The sub’s engines are dead, oxygen levels are descending as quickly as the submarine, and unless you locate the missing oxygen silos and restore power, you and the submarine’s crew are doomed to a watery grave. Ah, now that’s more like it. Welcome to the choices, challenges and mysteries of escape rooms. Getting out Escape rooms are physical adventure games that combine role playing, puzzles, treasure hunts and interactive mystery theater.