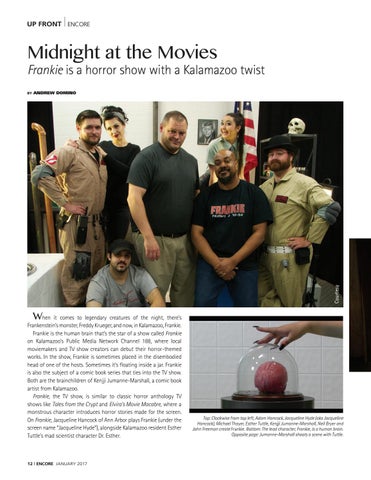 Midnight at the Movies

Frankie is a horror show with a Kalamazoo twist Andrew Domino

When it comes to legendary creatures of the night, there’s

Frankenstein’s monster, Freddy Krueger, and now, in Kalamazoo, Frankie. Frankie is the human brain that’s the star of a show called Frankie on Kalamazoo’s Public Media Network Channel 188, where local moviemakers and TV show creators can debut their horror-themed works. In the show, Frankie is sometimes placed in the disembodied head of one of the hosts. Sometimes it’s floating inside a jar. Frankie is also the subject of a comic book series that ties into the TV show. Both are the brainchildren of Kenjji Jumanne-Marshall, a comic book artist from Kalamazoo. Frankie, the TV show, is similar to classic horror anthology TV shows like Tales from the Crypt and Elvira’s Movie Macabre, where a monstrous character introduces horror stories made for the screen. On Frankie, Jacqueline Hancock of Ann Arbor plays Frankie (under the screen name “Jacqueline Hyde”), alongside Kalamazoo resident Esther Tuttle’s mad scientist character Dr. Esther.