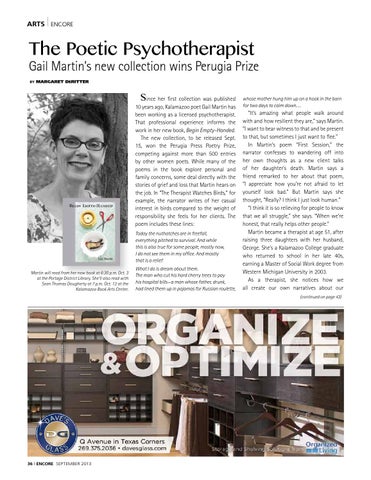 ince her first collection was published 10 years ago, Kalamazoo poet Gail Martin has been working as a licensed psychotherapist. That professional experience informs the work in her new book, Begin Empty-Handed. The new collection, to be released Sept. 15, won the Perugia Press Poetry Prize, competing against more than 500 entries by other women poets. While many of the poems in the book explore personal and family concerns, some deal directly with the stories of grief and loss that Martin hears on the job. In “The Therapist Watches Birds,” for example, the narrator writes of her casual interest in birds compared to the weight of responsibility she feels for her clients. The poem includes these lines: Today the nuthatches are in freefall, everything pitched to survival. And while this is also true for some people, mostly now, I do not see them in my office. And mostly that is a relief. Martin will read from her new book at 6:30 p.m. Oct. 3 at the Portage District Library. She’ll also read with Sean Thomas Dougherty at 7 p.m. Oct. 12 at the Kalamazoo Book Arts Center.

What I do is dream about them. The man who cut his hard cherry trees to pay his hospital bills—a man whose father, drunk, had lined them up in pajamas for Russian roulette,

“It’s amazing what people walk around with and how resilient they are,” says Martin. “I want to bear witness to that and be present to that, but sometimes I just want to flee.” In Martin’s poem “First Session,” the narrator confesses to wandering off into her own thoughts as a new client talks of her daughter’s death. Martin says a friend remarked to her about that poem, “I appreciate how you’re not afraid to let yourself look bad.” But Martin says she thought, “Really? I think I just look human.” “I think it is so relieving for people to know that we all struggle,” she says. “When we’re honest, that really helps other people.” Martin became a therapist at age 51, after raising three daughters with her husband, George. She’s a Kalamazoo College graduate who returned to school in her late 40s, earning a Master of Social Work degree from Western Michigan University in 2003. As a therapist, she notices how we all create our own narratives about our (continued on page 43)