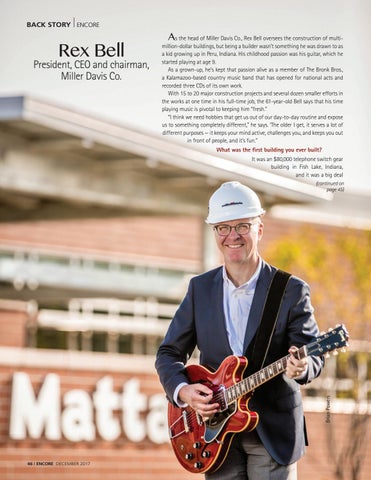 s the head of Miller Davis Co., Rex Bell oversees the construction of multimillion-dollar buildings, but being a builder wasn’t something he was drawn to as a kid growing up in Peru, Indiana. His childhood passion was his guitar, which he started playing at age 9. As a grown-up, he’s kept that passion alive as a member of The Bronk Bros., a Kalamazoo-based country music band that has opened for national acts and recorded three CDs of its own work. With 15 to 20 major construction projects and several dozen smaller efforts in the works at one time in his full-time job, the 61-year-old Bell says that his time playing music is pivotal to keeping him “fresh.” “I think we need hobbies that get us out of our day-to-day routine and expose us to something completely different,” he says. ‘The older I get, it serves a lot of different purposes — it keeps your mind active, challenges you, and keeps you out in front of people, and it’s fun.” What was the first building you ever built? It was an $80,000 telephone switch gear building in Fish Lake, Indiana, and it was a big deal