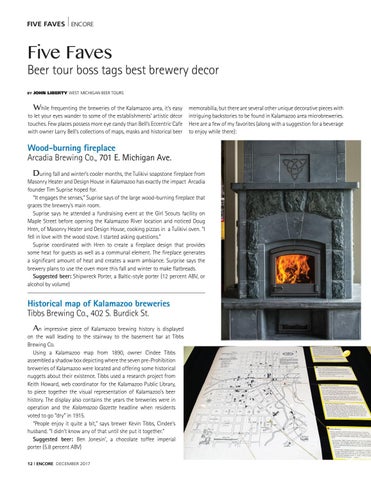 While frequenting the breweries of the Kalamazoo area, it’s easy to let your eyes wander to some of the establishments’ artistic décor touches. Few places possess more eye candy than Bell’s Eccentric Cafe with owner Larry Bell’s collections of maps, masks and historical beer

memorabilia, but there are several other unique decorative pieces with intriguing backstories to be found in Kalamazoo area microbreweries. Here are a few of my favorites (along with a suggestion for a beverage to enjoy while there):

Wood-burning fireplace Arcadia Brewing Co., 701 E. Michigan Ave. During fall and winter’s cooler months, the Tulikivi soapstone fireplace from Masonry Heater and Design House in Kalamazoo has exactly the impact Arcadia founder Tim Suprise hoped for. “It engages the senses,” Suprise says of the large wood-burning fireplace that graces the brewery’s main room. Suprise says he attended a fundraising event at the Girl Scouts facility on Maple Street before opening the Kalamazoo River location and noticed Doug Hren, of Masonry Heater and Design House, cooking pizzas in a Tulikivi oven. “I fell in love with the wood stove. I started asking questions.” Suprise coordinated with Hren to create a fireplace design that provides some heat for guests as well as a communal element. The fireplace generates a significant amount of heat and creates a warm ambiance. Surprise says the brewery plans to use the oven more this fall and winter to make flatbreads. Suggested beer: Shipwreck Porter, a Baltic-style porter (12 percent ABV, or alcohol by volume)

Historical map of Kalamazoo breweries Tibbs Brewing Co., 402 S. Burdick St. An impressive piece of Kalamazoo brewing history is displayed on the wall leading to the stairway to the basement bar at Tibbs Brewing Co. Using a Kalamazoo map from 1890, owner Cindee Tibbs assembled a shadow box depicting where the seven pre-Prohibition breweries of Kalamazoo were located and offering some historical nuggets about their existence. Tibbs used a research project from Keith Howard, web coordinator for the Kalamazoo Public Library, to piece together the visual representation of Kalamazoo’s beer history. The display also contains the years the breweries were in operation and the Kalamazoo Gazette headline when residents voted to go “dry” in 1915. “People enjoy it quite a bit,” says brewer Kevin Tibbs, Cindee’s husband. “I didn’t know any of that until she put it together.” Suggested beer: Ben Jonesin’, a chocolate toffee imperial porter (5.8 percent ABV) 12 | Encore DECEMBER 2017