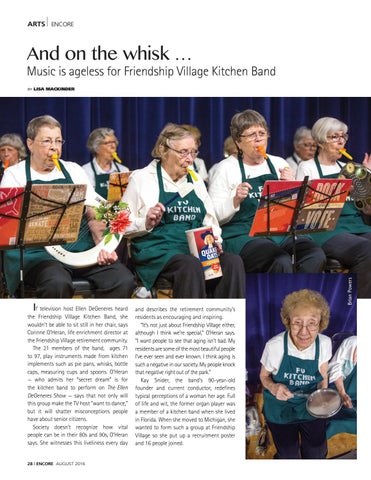 And on the whisk …

f television host Ellen DeGeneres heard the Friendship Village Kitchen Band, she wouldn’t be able to sit still in her chair, says Corinne O’Heran, life enrichment director at the Friendship Village retirement community. The 21 members of the band, ages 71 to 97, play instruments made from kitchen implements such as pie pans, whisks, bottle caps, measuring cups and spoons. O’Heran — who admits her “secret dream” is for the kitchen band to perform on The Ellen DeGeneres Show — says that not only will this group make the TV host “want to dance,” but it will shatter misconceptions people have about senior citizens. Society doesn’t recognize how vital people can be in their 80s and 90s, O’Heran says. She witnesses this liveliness every day

and describes the retirement community’s residents as encouraging and inspiring. “It’s not just about Friendship Village either, although I think we’re special,” O’Heran says. “I want people to see that aging isn’t bad. My residents are some of the most beautiful people I’ve ever seen and ever known. I think aging is such a negative in our society. My people knock that negative right out of the park.” Kay Snider, the band’s 90-year-old founder and current conductor, redefines typical perceptions of a woman her age. Full of life and wit, the former organ player was a member of a kitchen band when she lived in Florida. When she moved to Michigan, she wanted to form such a group at Friendship Village so she put up a recruitment poster and 16 people joined.