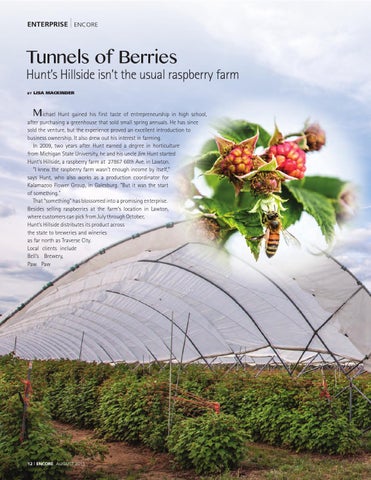 ichael Hunt gained his first taste of entrepreneurship in high school, after purchasing a greenhouse that sold small spring annuals. He has since sold the venture, but the experience proved an excellent introduction to business ownership. It also drew out his interest in farming. In 2009, two years after Hunt earned a degree in horticulture from Michigan State University, he and his uncle Jim Hunt started Hunt’s Hillside, a raspberry farm at 27867 66th Ave. in Lawton. “I knew the raspberry farm wasn’t enough income by itself,” says Hunt, who also works as a production coordinator for Kalamazoo Flower Group, in Galesburg. “But it was the start of something.” That “something” has blossomed into a promising enterprise. Besides selling raspberries at the farm’s location in Lawton, where customers can pick from July through October, Hunt’s Hillside distributes its product across the state to breweries and wineries as far north as Traverse City. Local clients include Bell’s Brewery, Paw Paw