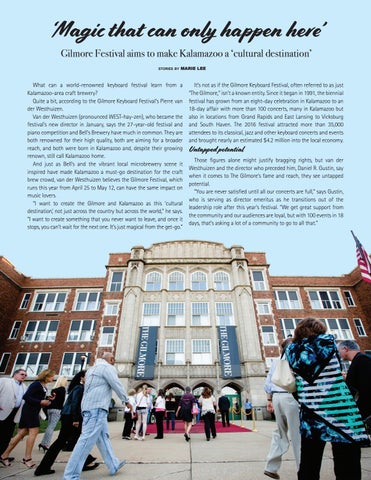 What can a world-renowned keyboard festival learn from a Kalamazoo-area craft brewery? Quite a bit, according to the Gilmore Keyboard Festival’s Pierre van der Westhuizen. Van der Westhuizen (pronounced WEST-hay-zen), who became the festival’s new director in January, says the 27-year-old festival and piano competition and Bell’s Brewery have much in common. They are both renowned for their high quality, both are aiming for a broader reach, and both were born in Kalamazoo and, despite their growing renown, still call Kalamazoo home. And just as Bell’s and the vibrant local microbrewery scene it inspired have made Kalamazoo a must-go destination for the craft brew crowd, van der Westhuizen believes the Gilmore Festival, which runs this year from April 25 to May 12, can have the same impact on music lovers. “I want to create the Gilmore and Kalamazoo as this ‘cultural destination,’ not just across the country but across the world,” he says. “I want to create something that you never want to leave, and once it stops, you can’t wait for the next one. It’s just magical from the get-go.”

It’s not as if the Gilmore Keyboard Festival, often referred to as just “The Gilmore,” isn’t a known entity. Since it began in 1991, the biennial festival has grown from an eight-day celebration in Kalamazoo to an 18-day affair with more than 100 concerts, many in Kalamazoo but also in locations from Grand Rapids and East Lansing to Vicksburg and South Haven. The 2016 festival attracted more than 35,000 attendees to its classical, jazz and other keyboard concerts and events and brought nearly an estimated $4.2 million into the local economy.

Untapped potential Those figures alone might justify bragging rights, but van der Westhuizen and the director who preceded him, Daniel R. Gustin, say when it comes to The Gilmore’s fame and reach, they see untapped potential. “You are never satisfied until all our concerts are full,” says Gustin, who is serving as director emeritus as he transitions out of the leadership role after this year’s festival. “We get great support from the community and our audiences are loyal, but with 100 events in 18 days, that’s asking a lot of a community to go to all that.”