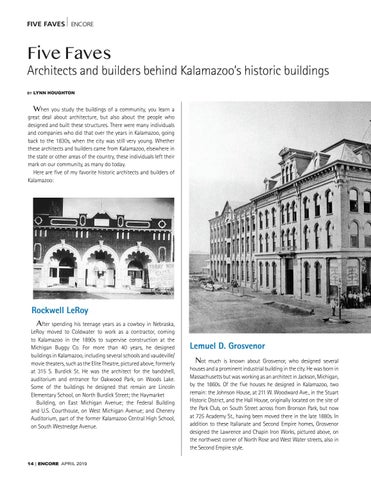 Architects and builders behind Kalamazooâ&#x20AC;&#x2122;s historic buildings by

When you study the buildings of a community, you learn a

great deal about architecture, but also about the people who designed and built these structures. There were many individuals and companies who did that over the years in Kalamazoo, going back to the 1830s, when the city was still very young. Whether these architects and builders came from Kalamazoo, elsewhere in the state or other areas of the country, these individuals left their mark on our community, as many do today. Here are five of my favorite historic architects and builders of Kalamazoo:

Rockwell LeRoy After spending his teenage years as a cowboy in Nebraska, LeRoy moved to Coldwater to work as a contractor, coming to Kalamazoo in the 1890s to supervise construction at the Michigan Buggy Co. For more than 40 years, he designed buildings in Kalamazoo, including several schools and vaudeville/ movie theaters, such as the Elite Theatre, pictured above, formerly at 315 S. Burdick St. He was the architect for the bandshell, auditorium and entrance for Oakwood Park, on Woods Lake. Some of the buildings he designed that remain are Lincoln Elementary School, on North Burdick Street; the Haymarket Building, on East Michigan Avenue; the Federal Building and U.S. Courthouse, on West Michigan Avenue; and Chenery Auditorium, part of the former Kalamazoo Central High School, on South Westnedge Avenue.

Lemuel D. Grosvenor Not much is known about Grosvenor, who designed several houses and a prominent industrial building in the city. He was born in Massachusetts but was working as an architect in Jackson, Michigan, by the 1860s. Of the five houses he designed in Kalamazoo, two remain: the Johnson House, at 211 W. Woodward Ave., in the Stuart Historic District, and the Hall House, originally located on the site of the Park Club, on South Street across from Bronson Park, but now at 725 Academy St., having been moved there in the late 1880s. In addition to these Italianate and Second Empire homes, Grosvenor designed the Lawrence and Chapin Iron Works, pictured above, on the northwest corner of North Rose and West Water streets, also in the Second Empire style.