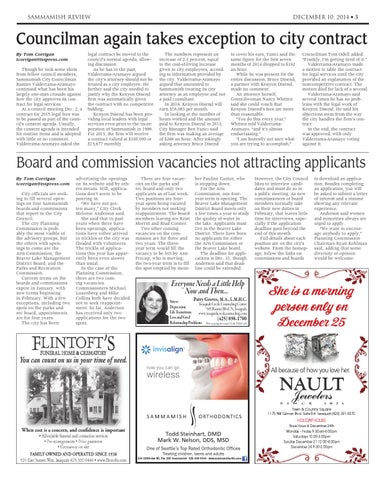 Though he took some shots from fellow council members, Sammamish City Councilman Ramiro Valderrama-Aramayo continued what has been his largely one-man crusade against how the city approves its contract for legal services. At a council meeting Dec. 2, a contract for 2015 legal fees was to be passed as part of the council’s consent agenda. Usually, the consent agenda is intended for routine items and is adopted with little or no comment. Valderrama-Aramayo asked the

legal contract be moved to the council’s normal agenda, allowing discussion. As he has in the past, Valderrama-Aramayo argued the city’s attorney should not be treated as a city employee. He further said the city needed to justify why the Kenyon Disend firm was automatically given the contract with no competitive bidding. Kenyon Disend has been providing local leaders with legal services even prior to the incorporation of Sammamish in 1999. For 2015, the firm will receive a contract valued at $188,000 or $15,677 monthly.

The numbers represent an increase of 2.3 percent, equal to the cost-of-living increase given to city employees, according to information provided by the city. Valderrama-Aramayo argued that amounted to Sammamish treating its city attorney as an employee and not a paid consultant. In 2016, Kenyon Disend will earn $16,083 per month. In looking at the number of hours worked and the amount paid to Kenyon Disend in 2013, City Manager Ben Yazici said the firm was making an average of $266 an hour. After jokingly asking attorney Bruce Disend

to cover his ears, Yazici said the same figure for the first seven months of 2014 dropped to $162 an hour. While he was present for the entire discussion, Bruce Disend, a partner with Kenyon Disend, made no comment. An attorney herself, Councilwoman Nancy Whitten said she could vouch that Kenyon Disend’s fees are more than reasonable. “You do this every year,” Whitten told ValderramaAramayo, “and it’s almost embarrassing.” “I am honestly not sure what you are trying to accomplish,”

Board and commission vacancies not attracting applicants By Tom Corrigan tcorrigan@isspress.com

City officials are seeking to fill several openings on four Sammamish boards and commissions that report to the City Council. The city Planning Commission is probably the most visible of the advisory groups, but the others with openings to come are the Arts Commission, the Beaver Lake Management District Board, and the Parks and Recreation Commission. Current terms on the boards and commissions expire in January, with new terms beginning in February. With a few exceptions, including two spots on the parks and rec board, appointments are for four years. The city has been

advertising the openings on its website and by others means. Still, applications don’t seem to be pouring in. “We have not gotten many,” City Clerk Melonie Anderson said. She said that in past years when there have been openings, applications have either arrived in trickles or the city was flooded with volunteers. The trickle of applications this year has apparently been even slower than usual. In the case of the Planning Commission, there are two coming vacancies. Commissioners Michael Luxenberg and Mike Collins both have decided not to seek reappointment. So far, Anderson has received only two applications for the two spots.

There are four vacancies on the parks and rec board and only two applicants as of last week. Two positions are fouryear spots being vacated by members not seeking reappointment. The board members leaving are Krist Morritt and Brad Conner. Two other coming vacancies on the commission are for three and two years. The threeyear term would fill the vacancy to be left by Ann Precup, who is moving; the two-year term is to fill the spot emptied by mem-

However, the City Council likes to interview candidates and must do so in a public meeting. As new commissioners or board members normally take on their new duties in February, that leaves little time for interviews, especially if the application deadline goes beyond the end of this month. Full details about each position are on the city’s website. From the homepage, follow the links on commissions and boards

to download an application. Besides completing an application, you will be asked to submit a letter of interest and a résumé showing any relevant experience. Anderson said women and minorities always are urged to apply. “We want to encourage anybody to apply,” Planning Commission Chairman Ryan Kohlman said, adding that some diversity of opinion would be welcome.

Everyone Needs a Little Help Now and Then...

now you can go

All because of how you love her.