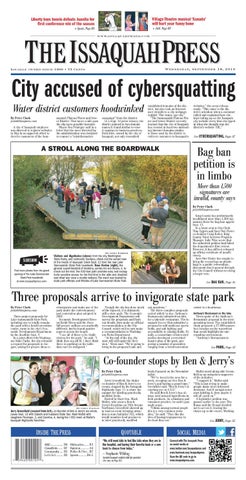 Alumna group seeks book donations for local child patients By Kristine Kim news@isspress.com Members of the Bellevue-Eastside Pi Beta Phi Fraternity for Women Alumnae Club will be in the lobby of the Issaquah campus of Swedish Medical Center collecting new or gently used books for children Sept. 25. The event is a continuation of a project the group, whose fraternity’s philanthropy is literacy, started last year. “About a year ago, we got together and decided we need a project that helps our local community,” said Claire Cahill, a member of the group. With the then-newly established Swedish Medical Center in Issaquah, the women saw an opportunity. During the process, the group worked with Pinky Herrera, who manages and supervises the Eastside volunteer program of Swedish/Issaquah. “Instead of putting together something when the need is here, we kind of assessed what the anticipated needs would be,” Herrera said. The “library” — unlike a traditional library, children keep the books they choose to avoid the spread of infection — was something the hospital could use. Two carts donated by the sorority club stand in a section of the pediatric ward and the emergency room. Having books on hand for children is especially important because of their age. “We still want kids to feel like kids when they are in the hospital, and having their favorite book or a new book to choose from helps a lot towards that goal,” said Stephanie Wilding, the certified child life specialist at Swedish. “It is our goal here at Swedish/ Issaquah to make the experience of our pediatric patients to be the most fun and pleasant as possible.” Herrera said that most of the child patient population at the hospital is under 10, but a range of children from infants to teenagers use the book carts. Dr. Seuss and Clifford the Dog are always a

favorite with the children, and books based on or related to movies may be popular as well. “We went to Scholastic and got books there so we could at least fill the carts when they first started,” Cahill said. In September 2012, they had their first book drive in the lobby of the hospital, and another one at the facility’s open house in December. Since they were just starting out, they were surprised at the response of people bringing books to them. The group originally only accepted new books, but after many of the hospital staff members brought gently used books, they realized they could open their options. Due to the nature of the book carts not being a lending library, having a better stock of books is necessary, as books cannot simply rotate out. Cahill suggests other groups can take up similar projects. Groups do not necessarily have to donate to the fraternity’s book drive; seniors in high school can put together a senior project, or someone could collect books for other hospitals. Having stories sitting on shelves can be invaluable to kids, and Wilding said children love the books. It is a similar case from Herrera’s perspective. “Since my role is really more the background role, what I think has been very meaningful to me is having groups of people who volunteer their time, resources and energy to really support our programs here to have the best possible patient experience,” she said. “Having a role in facilitating that effort is very meaningful.”

Elias Blackmarr, 6, from Issaquah, watches his bubble masterpiece begin to pop. He was playing in the fields of Dr. Maze’s Farm on Aug. 23 during the opening weekend of its 4-acre sunflower and corn maze in Redmond. The farm is open Fridays and Saturdays from 10 a.m. to 2 p.m. Activities for visitors include hayride tours, rubber-duck races, meeting and feeding the farm animals, and Saturday farmyard crafts. Learn more at www.drmazesfarm.com.

Passing shots AN OCCASIONAL LOOK AT IMAGES CONTRIBUTED BY THE COMMUNITY Riley Dieffenbach (left) and Katie Braden share a laugh while learning how to open lockers Aug. 23 at Beaver Lake Middle School. Dieffenbach and Braden were part of a huge group of new students and incoming sixth-graders who attended the school’s orientation ‘scavenger hunt.’ School officials separated the students into small groups and had eighth-graders lead them around the building. They learned several things, including what sports the school offers, when daily announcements are made, how to check out library books and where fees are paid. BY NEIL PIERSON

Splash!MOB contest takes over Issaquah Issaquah shoppers and diners may have noticed a slew of richly decorated salmon perched among city businesses and restaurants. The fake fish hold the key to a rather hefty prize. The Salmon Days Festival’s Splash!MOB: The Ultimate Salmon Quest returns this year with a grand prize of $650 worth of local gift cards given to a lucky winner who completes the salmon scaven-

The Issaquah History Museums take requests regarding what people would like to see in the Digital Collection. Roughly quarterly, volunteers have a data-entry day and prep a bunch of records for upload. If there is a particular name, place or item you’d like to see more images of on the website, email Erica Maniez at erica. maniez@issaquahhistory.org. If you have a photo or subject you would like to see in this feature, email editor@isspress.com.

ger hunt. Contestants can pick up an official game card online at www.splashmobgame.org or at any one of 20 participating Issaquah businesses. The card resembles a bingo sheet, but each of the 20 squares is filled with the logo of a local business. Salmon seekers must visit each business and find the hidden, decorated fish to receive a

stamp on their game card. Once the card is completed, bring it to the Issaquah Visitor’s Center by noon Oct. 4 to be eligible for the grand prize drawing. Names will be drawn Oct. 4 for both the $650 prize and for a secondplace prize of $250 worth of local gift cards. Winners do not need to be Issaquah residents, and they do not need to be present at the drawing to win.

ON THE WEB Learn more about Splash!MOB: The Ultimate Salmon Quest at www. splashmobgame.org. The gift cards are from merchants including Fischer Meats, Integrity Automotive and Wild Fin American Grill.

Sammamish Plateau’s largest garage sale returns Sept. 27-28 Faith United Methodist Church’s annual Habitat for Humanity garage sale returns Sept. 27-28. Bargain hunters can peruse and purchase donated merchandise both days. “During the sale, our building is full of items,” the Rev. Dr. John Brewer said, “and they even spill over to the areas outside the church.” Brewer said shoppers should arrive early on Friday to get the best deals on the best items. “There are usually at least 150 people waiting in line to get in the door when the sale begins,” he said. “It’s a win for all involved: People clean up their homes by donating to the sale. People in need find great deals, and Habitat for Humanity receives 100 percent of proceeds to help provide homes to those who don’t have one.” CDs, DVDs, children’s toys, furniture, tools and

important cost-savings opportunity for those with limited finances, Box said. “I remember seeing a little boy with his arms filled with toys, thrilled to death with all the neat stuff he was getting, and his mom’s obvious joy at being able to say yes when he asked for the toys,” she said. “And I loved seeing a young couple, outfitting their first apartment, be able to purchase really nice things for a fraction of what they would pay at retail, such as an espresso machine for $5.” Though the funds for Habitat for Humanity provide a charitable focus for the event, “the garage sale is more than just Habitat for Humanity,” sale volunteer Sandy Nielsen said. “It is faith in action, community involvement, fellowship and fun.” Learn more at www. habitatgaragesale.org, 392-0123 or H4H@faithunited.org.