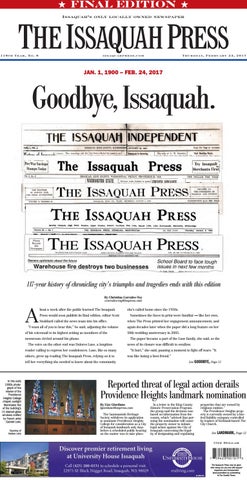 117-year history of chronicling city’s triumphs and tragedies ends with this edition By Christina Corrales-Toy ccorrales-toy@isspress.com

bout a week after the public learned The Issaquah Press would soon publish its final edition, editor Scott

she’s called home since the 1950s. Sometimes the faces in print were familiar — like her own,

Stoddard called the news team into his office.

when The Press printed her engagement announcement, and

“I want all of you to hear this,” he said, adjusting the volume

of his voicemail to its highest setting as members of the

50th wedding anniversary in 2005. The paper became a part of the Luse family, she said, so the

newsroom circled around his phone. The voice on the other end was Dolores Luse, a longtime reader calling to express her condolences. Luse, like so many others, grew up reading The Issaquah Press, relying on it to

news of its closure was difficult to swallow. “It hurt,” she said, pausing a moment to fight off tears. “It was like losing a best friend.”

tell her everything she needed to know about the community

In this early 1960s photograph of the interior of the Providence Heights College chapel, sunlight illuminates five of the building’s 14 stained-glass windows crafted by French artist Gabriel Loire. Courtesy of Ateliers Loire

Reported threat of legal action derails Providence Heights landmark nomination By Lizz Giordano lgiordano@isspress.com The Sammamish Heritage Society withdrew its application to nominate Providence Heights College for consideration as a City of Issaquah landmark only days before a scheduled public hearing on the matter was to take place.

In a letter to the King County Historic Preservation Program, the group said the decision was based on information from the county, which “advised that pursuing the nomination will cause the property owner to initiate legal action against the City of Issaquah concerning the legality of designating and regulating

properties that are owned by religious entities.” The Providence Heights property is currently owned by a limited liability company controlled by leaders of Kirkland-based The City Church. See LANDMARK, Page 12

The Issaquah Press may be gone after today, but you can still support important and independent local journalism by subscribing to The Seattle Times.