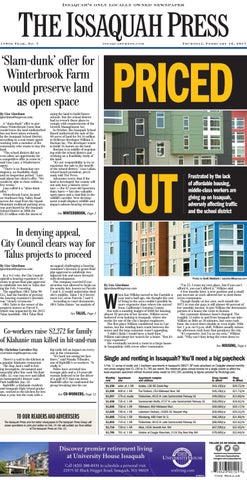 ‘Slam-dunk’ offer for Winterbrook Farm would preserve land as open space By Lizz Giordano lgiordano@isspress.com A “slam-dunk” offer to purchase Winterbrook Farm that would leave the land undisturbed has not been taken seriously by the Issaquah School District, according to a real estate agent working with a member of the community who wants to buy the land. “The school district did not even allow an opportunity for a competitive offer to come in,” said Lisa Lam, a Windermere agent. “There is no financing contingency, no feasibility study and no inspection period,” Lam said about her client’s offer. “We would be able to close within a few weeks.” Lam called it a “slam-dunk offer.” Winterbrook Farm, located on Southeast May Valley Road across the road from the Squak Mountain trailhead parking area, was purchased by the Issaquah School District in 2006 for $3.33 million with the intent of

using the land to build future schools. But the school district had to rework those plans to comply with requirements of the Growth Management Act. In October, the Issaquah School Board authorized the sale of the 80 acres of land for $4.16 million to Bellevue developer William E. Buchan Inc. The developer wants to build 16 homes on the land. Buchan is in middle of negotiating with the school district and working on a feasibility study of the land. “It’s our responsibility to try to maximize the sale to the benefit of the school district,” Lisa Callan, school board president, previously told The Press. Advocates worry that if the land is developed, the county will not only lose a historic structure — the 87-year-old Speerstra dairy barn — but also valuable open space and a vital link in the wildlife corridor. New development would displace wildlife and impact salmon-bearing streams See WINTERBROOK, Page 5

In denying appeal, City Council clears way for Talus projects to proceed By Lizz Giordano lgiordano@isspress.com In a 4-2 vote, the City Council upheld a hearing examiner’s decision to grant final plat approval to subdivide two lots in Talus during the Feb. 8 meeting. The appellant, ORA Talus 90 LLC, had the burden of proving the hearing examiner’s decision was “clearly erroneous.” ORA Talus is the owner of the property known as Parcel 9, which was impacted by the 2015 Talus landslide. ORA Talus filed

an appeal challenging a hearing examiner’s decision to grant final plat approval to subdivide two adjacent lots and move forward with development. The company worried if construction was allowed to begin on the nearby lots, known as Parcels 7 and 8, it would undermine their site’s stability. Talus 7 & 8 Investment LLC owns Parcels 7 and 8. According to court documents, ORA Talus claims “an analysis of See TALUS, Page 5

Co-workers raise $2,272 for family of Klahanie man killed in hit-and-run By Christina Corrales-Toy ccorrales-toy@isspress.com There’s a void in the kitchen at a popular Klahanie restaurant. The Hop Jack’s staff is feeling incomplete, devastated and mournful after line cook Mo Radcliffe, 22, was run over and killed at Sammamish’s Beaver Lake Park ballfields Jan. 25. Radcliffe, a Klahanie resident and Issaquah High School graduate, worked in the kitchen for less than a year, but the cook with a

big smile left an impact on everyone in the restaurant. “It’s hard not seeing his face there,” said Wanda Triboulet, one of Radcliffe’s co-workers. “It really is.” Police have arrested two teenage girls and a 23-year-old woman believed to be the driver of a gold SUV that ran down Radcliffe after he confronted the group breaking into his car. See CO-WORKERS, Page 12

TO OUR READERS AND ADVERTISERS

Frustrated by the lack of affordable housing, middle-class workers are giving up on Issaquah, adversely affecting traffic and the school district

hen Kat Wilkins moved to the Eastside a year and a half ago, she thought the cost of living in the area couldn’t possibly be more expensive than where she moved from, California’s Sonoma County. But with a monthly budget of $800 for housing, almost 50 percent of her income, Wilkins never bothered even looking in Issaquah, where she works for one of the city’s largest employers. The first place Wilkins considered was in Carnation, but the winding back roads between the towns and the long commute wasn’t appealing. “I didn’t think I would have a hard time,” Wilkins said about her search for a home. “But it’s crazy expensive.” She eventually secured a room in a large house in Snoqualmie with seven other roommates.

“I’m 55, I want my own place, but if you can’t afford it, you can’t afford it,” Wilkins said. A few months later, a new position and a small pay increase at work allowed her to shed those seven roommates. Though finally on her own, each month the $975 in rent she pays is still almost 40 percent of her monthly income. It gets Wilkins the downstairs portion of a house she rents in Renton. Her commute distance hasn’t changed. The roughly 12 miles to and from Issaquah can take Wilkins as little as 20 minutes, but come rush hour, the travel times double or even triple. With her 1 p.m.-to-9 p.m. shift, Wilkins usually misses the afternoon rush hour that paralyzes the city. “It’s expensive, but I’m on my own,” Wilkins said. “Why can’t they bring the rents down so See HOUSING, Page 6

Single and renting in Issaquah? You’ll need a big paycheck A Feb. 11 survey of studio and 1-bedroom apartments in Issaquah’s 98027 ZIP code advertised on Craigslist showed monthly rent prices ranging from $1,150 to $1,785 per month. The minimum gross annual income for a single person to afford the least-expensive apartment without financial stress would be $43,100, according to figures provided by RentLingo.com. Monthly Apartment rent size