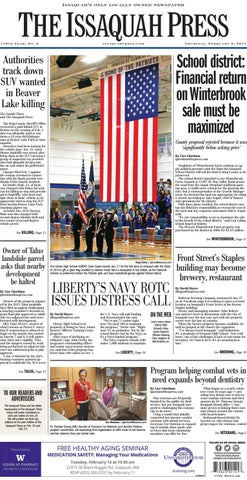 School district: Financial return on Winterbrook sale must be maximized

Authorities track down SUV wanted in Beaver Lake killing The Seattle Times and The Issaquah Press The King County Sheriff’s Office recovered a gold Infiniti SUV in Renton on the evening of Feb. 2 that was allegedly used to run down a 22-year-old Klahanie man at Beaver Lake Park in Sammamish. Detectives had been looking for the vehicle since Jan. 25, when Moises Radcliffe was struck after firing shots at the SUV carrying a group of suspected car prowlers who had allegedly broken into his car and stolen his girlfriend’s purse. Charges filed Feb. 1 against the woman arrested in connection with his death provide new details of the chaotic incident. Ka’Deidre Rials, 23, of Kent, was charged with felony hit-andrun for failing to stop and provide aid to Radcliffe, who fired multiple shots at Rials’ vehicle as he apparently tried to stop the SUV from leaving Beaver Lake Park, charging papers say. Arrested Jan. 28 in Skyway, Rials was also charged with second-degree identity theft and two counts of second-degree vehicle prowl.

County proposal rejected because it was ‘significantly below asking price’ By Lizz Giordano lgiordano@isspress.com Neighbors of Winterbrook Farm continue to apply political pressure with the hope the Issaquah School District will sell the land to King County to be preserved. The school district intended to use Winterbrook Farm, located at 21207 SE May Valley Road across the road from the Squak Mountain trailhead parking area, to build more schools for the growing district. But a reinterpretation of the Growth Management Act deemed the land not appropriate for siting a school, according to Jake Kuper, chief of finance and operations for the district. With those plans scuttled, the school district now has the fiduciary responsibility to recoup the cost of the land and any expenses associated with it, Kuper said. “It’s our responsibility to try to maximize the sale to the benefit of the school district,” said Lisa Callan, school board president. The 80-acre Winterbrook Farm property was purchased by the district in 2006 for $3.33 million.

Owner of Talus landslide parcel asks that nearby development be halted By Lizz Giordano lgiordano@isspress.com Owners of the property impacted by the 2015 Talus landslide have filed an appeal challenging a hearing examiner’s decision to grant final plat approval to subdivide two adjacent lots and move forward with development. ORA Talus 90 LLC, owners of what’s known as Parcel 9, worry that if construction is allowed to begin on the nearby lots, known as Parcels 7 and 8, it will undermine their site’s stability. They said the dangers raised by work being performed on adjacent lots were not addressed prior to plat approval. A Jan. 4 decision by the city’s hearing examiner granted approval to subdivide the 28.8 acres

The Liberty High School NJROTC Color Guard stands Jan. 27 for the first time at midcourt with the Class of 2015’s gift, a giant flag unrolled by electric motor from a receptacle in the rafters, as the National Anthem is performed before the Patriots’ girls and boys basketball games against Mercer Island.

the U.S. Navy will pull funding and decommission the unit. “We’ve got 71 cadets right now. We need 100 to maintain the program,” Deehr said. “Right now, it’s on probation. Not by the school district, but by the Navy, as it’s a Navy-funded program.” The Navy requires schools with under 1,000 students to maintain

By David Hayes dhayes@isspress.com Bellevue Brewing Company announced Jan. 27 on its Facebook page it is seeking to open a second location on Issaquah’s Front Street at the former Staples building. Owner and managing member John Robertson said he’s been in discussions with the City of Issaquah over the last year and with the property owner over the last six months. When the former property became available, he said he jumped at the chance for expansion. “I’ve always loved Issaquah,” said Robertson, 49, a graduate of Newport High School. “For craft beers, one of the challenges is lack of real estate for inventory. So I had to do it. It’s an amazing location.” See BREWING, Page 10

Dr. Theresa Cheng (left), founder of Everyone For Veterans, and Jennifer Shelton, program coordinator, are expanding their organization to offer more to low-income combat veterans than just dental care.

War veterans are frequently thanked by the public for their service, but one Issaquah nonprofit is challenging the community to do more. Using a model that initially connected low-income combat veterans with dental services, Everyone For Veterans is expanding to include other goods and services that local community members can offer for free.

What began as a yearly volunteer event 10 years ago — providing free dental care to low-income combat veterans and their spouses by Dr. Theresa Cheng’s Issaquah dental office — has since grown to linking those men and women around the country with local dentists. Redmond-based dentist Dr. Garrick Lo, who always had great respect for veterans, waited See VETERANS, Page 2 FOLLOW US ON SOCIAL MEDIA