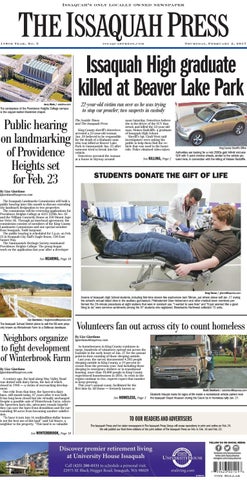 The centerpiece of the Providence Heights College campus is the copper-roofed Modernist chapel.

Public hearing on landmarking of Providence Heights set for Feb. 23

22-year-old victim run over as he was trying to stop car prowler; two suspects in custody

The Seattle Times and The Issaquah Press King County sheriff’s detectives arrested a 23-year-old woman Jan. 28 believed to be responsible for the death of a Klahanie man who was killed at Beaver Lake Park in Sammamish Jan. 25 after someone tried to break into his vehicle. Detectives arrested the woman at a house in Skyway around

noon Saturday. Detectives believe she is the driver of the SUV that struck and killed the 22-year-old man, Moises Radcliffe, a graduate of Issaquah High School. Sheriff’s Sgt. Cindi West said investigators were asking the public to help them find the vehicle that was used in the homicide. Police obtained video taken See KILLING, Page 2

Authorities are looking for a mid-2000s gold Infiniti mid-size SUV with 5 point chrome wheels, similar to the vehicle pictured here, in connection with the killing of Moises Radcliffe.

STUDENTS DONATE THE GIFT OF LIFE

By Lizz Giordano lgiordano@isspress.com The Issaquah Landmarks Commission will hold a public hearing later this month to discuss extending city landmark designation to two properties. The commission will be reviewing applications for Providence Heights College at 4221 228th Ave. SE and the William Conrardy House at 350 Mount Jupiter Drive SE. Through an interlocal agreement, the commission consists of members of the King County Landmarks Commission and one special member from Issaquah, Todd Sargeant. The public hearing is scheduled for 5 p.m. on Feb. 23 in Issaquah City Hall’s Eagle Room, 130 East Sunset Way. The Sammamish Heritage Society nominated Providence Heights College. The group began work on the application last year after a developer See HEARING, Page 10

Dozens of Issaquah High School students, including first-time donors like sophomore Jack Tillman, put others above self Jan. 27 during the school’s annual blood drive in the auxiliary gymnasium. Phlebotomist Dave Heinemann and other medical team members performed the 20-minute procedures at eight stations that were in constant use. “I wanted to save lives” and “It just seemed like a good thing to do” were common sentiments among the 97 students who registered. Bloodworks Northwest collected 73 units.

The Issaquah School District plans to sell the 80-acre property known as Winterbrook Farm to a Bellevue developer.

Neighbors organize to fight development of Winterbrook Farm By Lizz Giordano lgiordano@isspress.com A century ago, the land along May Valley Road was dotted with dairy farms, the last of which closed in 1988 — a victim of encroaching development. One relic from that time, the Speerstra dairy barn, still stands today, 87 years after it was built. It has long been closed but sits virtually unchanged. Despite a possible sale of Winterbrook Farm, where the Speerstra barn sits, advocates remain hopeful they can save the barn from demolition and the surrounding 80 acres from becoming another subdivision. “To have it turn into 16 multimillion-dollar homes is not the best use of this land” said Val Moore, a neighbor to the property. “This land is so valuable See WINTERBROOK, Page 10

Volunteers fan out across city to count homeless By Lizz Giordano lgiordano@isspress.com As homelessness in King County continues to surge, hundreds of volunteers spread out across the Eastside in the early hours of Jan. 27 for the annual point-in-time counting of those sleeping outside. Last year, the survey documented 4,505 people sleeping outside in King County, a 19 percent increase from the previous year. And including those sleeping in emergency shelters or in transitional housing, more than 10,000 people in King County experienced homelessness in 2016. As rents in the region continue to rise, experts expect that number to keep growing. This year’s annual count, facilitated for the first time by All Home — formerly known as See HOMELESS, Page 3

Elizabeth Maupin looks for signs of life inside a recreational vehicle parked near the Issaquah Depot Museum during the Count Us In homeless tally Jan. 27.