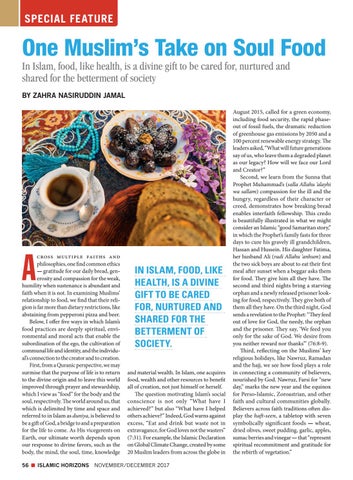 One Muslim’s Take on Soul Food In Islam, food, like health, is a divine gift to be cared for, nurtured and shared for the betterment of society BY ZAHRA NASIRUDDIN JAMAL

cross multiple faiths and philosophies, one find common ethics — gratitude for our daily bread, generosity and compassion for the weak, humility when sustenance is abundant and faith when it is not. In examining Muslims’ relationship to food, we find that their religion is far more than dietary restrictions, like abstaining from pepperoni pizza and beer. Below, I offer five ways in which Islam’s food practices are deeply spiritual, environmental and moral acts that enable the subordination of the ego, the cultivation of communal life and identity, and the individual’s connection to the creator and to creation. First, from a Quranic perspective, we may surmise that the purpose of life is to return to the divine origin and to leave this world improved through prayer and stewardship, which I view as “food” for the body and the soul, respectively. The world around us, that which is delimited by time and space and referred to in Islam as duniya, is believed to be a gift of God, a bridge to and a preparation for the life to come. As His vicegerents on Earth, our ultimate worth depends upon our response to divine favors, such as the body, the mind, the soul, time, knowledge

IN ISLAM, FOOD, LIKE HEALTH, IS A DIVINE GIFT TO BE CARED FOR, NURTURED AND SHARED FOR THE BETTERMENT OF SOCIETY. and material wealth. In Islam, one acquires food, wealth and other resources to benefit all of creation, not just himself or herself. The question motivating Islam’s social conscience is not only “What have I achieved?” but also “What have I helped others achieve?” Indeed, God warns against excess, “Eat and drink but waste not in extravagance, for God loves not the wasters” (7:31). For example, the Islamic Declaration on Global Climate Change, created by some 20 Muslim leaders from across the globe in

August 2015, called for a green economy, including food security, the rapid phaseout of fossil fuels, the dramatic reduction of greenhouse gas emissions by 2050 and a 100 percent renewable energy strategy. The leaders asked, “What will future generations say of us, who leave them a degraded planet as our legacy? How will we face our Lord and Creator?” Second, we learn from the Sunna that Prophet Muhammad’s (salla Allahu ‘alayhi wa sallam) compassion for the ill and the hungry, regardless of their character or creed, demonstrates how breaking bread enables interfaith fellowship. This credo is beautifully illustrated in what we might consider an Islamic “good Samaritan story,” in which the Prophet’s family fasts for three days to cure his gravely ill grandchildren, Hassan and Hussein. His daughter Fatima, her husband Ali (radi Allahu ‘anhum) and the two sick boys are about to eat their first meal after sunset when a beggar asks them for food. They give him all they have. The second and third nights bring a starving orphan and a newly released prisoner looking for food, respectively. They give both of them all they have. On the third night, God sends a revelation to the Prophet: “They feed out of love for God, the needy, the orphan and the prisoner. They say, ‘We feed you only for the sake of God. We desire from you neither reward nor thanks’” (76:8-9). Third, reflecting on the Muslims’ key religious holidays, like Nawruz, Ramadan and the hajj, we see how food plays a role in connecting a community of believers, nourished by God. Nawruz, Farsi for “new day,” marks the new year and the equinox for Perso-Islamic, Zoroastrian, and other faith and cultural communities globally. Believers across faith traditions often display the haft-seen, a tabletop with seven symbolically significant foods — wheat, dried olives, sweet pudding, garlic, apples, sumac berries and vinegar — that “represent spiritual recommitment and gratitude for the rebirth of vegetation.”