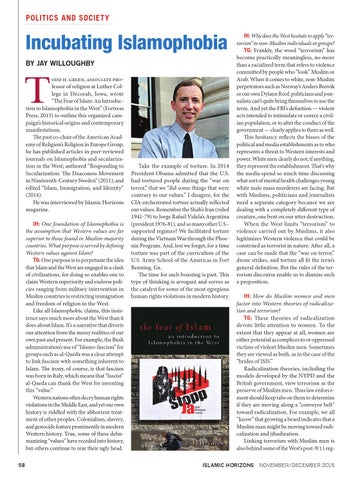 odd H. Green, associate professor of religion at Luther College in Decorah, Iowa, wrote “The Fear of Islam: An Introduction to Islamophobia in the West” (Fortress Press, 2015) to outline this organized campaign’s historical origins and contemporary manifestations. The past co-chair of the American Academy of Religion’s Religion in Europe Group, he has published articles in peer-reviewed journals on Islamophobia and secularization in the West; authored “Responding to Secularization: The Deaconess Movement in Nineteenth-Century Sweden” (2011); and edited “Islam, Immigration, and Identity” (2014). He was interviewed by Islamic Horizons magazine. IH: One foundation of Islamophobia is the assumption that Western values are far superior to those found in Muslim-majority countries. What purpose is served by defining Western values against Islam? TG: One purpose is to perpetuate the idea that Islam and the West are engaged in a clash of civilizations, for doing so enables one to claim Western superiority and endorse policies ranging from military intervention in Muslim countries to restricting immigration and freedom of religion in the West. Like all Islamophobic claims, this insistence says much more about the West than it does about Islam. It’s a narrative that diverts our attention from the messy realities of our own past and present. For example, the Bush administration’s use of “Islamo-fascism” for groups such as al-Qaeda was a clear attempt to link fascism with something inherent to Islam. The irony, of course, is that fascism was born in Italy, which means that “fascist” al-Qaeda can thank the West for inventing this “value.” Western nations often decry human rights violations in the Middle East, and yet our own history is riddled with the abhorrent treatment of other peoples. Colonialism, slavery, and genocide feature prominently in modern Western history. True, some of these dehumanizing “values” have receded into history, but others continue to rear their ugly head.

Take the example of torture. In 2014 President Obama admitted that the U.S. had tortured people during the “war on terror,” that we “did some things that were contrary to our values.” I disagree, for the CIA-orchestrated torture actually reflected our values. Remember the Shah’s Iran (ruled 1941-79) to Jorge Rafaél Videla’s Argentina (president 1976-81), and so many other U.S.supported regimes? We facilitated torture during the Vietnam War through the Phoenix Program. And, lest we forget, for a time torture was part of the curriculum of the U.S. Army School of the Americas in Fort Benning, Ga. The time for such boasting is past. This type of thinking is arrogant and serves as the catalyst for some of the most egregious human rights violations in modern history.

IH: Why does the West hesitate to apply “terrorism” to non-Muslim individuals or groups? TG: Frankly, the word “terrorism” has become practically meaningless, no more than a racialized term that refers to violence committed by people who “look” Muslim or Arab. When it comes to white, non-Muslim perpetrators such as Norway’s Anders Breivik or our own Dylann Roof, politicians and journalists can’t quite bring themselves to use the term. And yet the FBI’s definition — violent acts intended to intimidate or coerce a civilian population, or to alter the conduct of the government — clearly applies to them as well. This hesitancy reflects the biases of the political and media establishments as to who represents a threat to Western interests and power. White men clearly do not; if anything, they represent the establishment. That’s why the media spend so much time discussing what sort of mental health challenges young white male mass murderers are facing. But with Muslims, politicians and journalists need a separate category because we are dealing with a completely different type of creature, one bent on our utter destruction. When the West limits “terrorism” to violence carried out by Muslims, it also legitimizes Western violence that could be construed as terrorist in nature. After all, a case can be made that the “war on terror,” drone strikes, and torture all fit the term’s general definition. But the rules of the terrorism discourse enable us to dismiss such a proposition. IH: How do Muslim women and men factor into Western theories of radicalization and terrorism? TG: These theories of radicalization devote little attention to women. To the extent that they appear at all, women are either potential accomplices to or oppressed victims of violent Muslim men. Sometimes they are viewed as both, as in the case of the “brides of ISIS.” Radicalization theories, including the models developed by the NYPD and the British government, view terrorism as the preserve of Muslim men. Thus law enforcement should keep tabs on them to determine if they are moving along a “conveyor belt” toward radicalization. For example, we all “know” that growing a beard indicates that a Muslim man might be moving toward radicalization and jihadization. Linking terrorism with Muslim men is also behind some of the West’s post-9/11 reg-