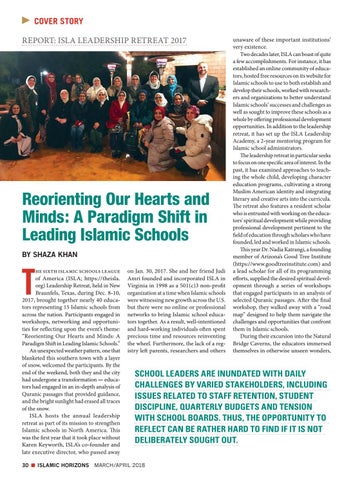 Reorienting Our Hearts and Minds: A Paradigm Shift in Leading Islamic Schools BY SHAZA KHAN

he sixth Islamic Schools League of America (ISLA; https://theisla. org) Leadership Retreat, held in New Braunfels, Texas, during Dec. 8-10, 2017, brought together nearly 40 educators representing 15 Islamic schools from across the nation. Participants engaged in workshops, networking and opportunities for reflecting upon the event’s theme: “Reorienting Our Hearts and Minds: A Paradigm Shift in Leading Islamic Schools.” An unexpected weather pattern, one that blanketed this southern town with a layer of snow, welcomed the participants. By the end of the weekend, both they and the city had undergone a transformation — educators had engaged in an in-depth analysis of Quranic passages that provided guidance, and the bright sunlight had erased all traces of the snow. ISLA hosts the annual leadership retreat as part of its mission to strengthen Islamic schools in North America. This was the first year that it took place without Karen Keyworth, ISLA’s co-founder and late executive director, who passed away

on Jan. 30, 2017. She and her friend Judi Amri founded and incorporated ISLA in Virginia in 1998 as a 501(c)3 non-profit organization at a time when Islamic schools were witnessing new growth across the U.S. but there were no online or professional networks to bring Islamic school educators together. As a result, well-intentioned and hard-working individuals often spent precious time and resources reinventing the wheel. Furthermore, the lack of a registry left parents, researchers and others

unaware of these important institutions’ very existence. Two decades later, ISLA can boast of quite a few accomplishments. For instance, it has established an online community of educators, hosted free resources on its website for Islamic schools to use to both establish and develop their schools, worked with researchers and organizations to better understand Islamic schools’ successes and challenges as well as sought to improve these schools as a whole by offering professional development opportunities. In addition to the leadership retreat, it has set up the ISLA Leadership Academy, a 2-year mentoring program for Islamic school administrators. The leadership retreat in particular seeks to focus on one specific area of interest. In the past, it has examined approaches to teaching the whole child, developing character education programs, cultivating a strong Muslim American identity and integrating literary and creative arts into the curricula. The retreat also features a resident scholar who is entrusted with working on the educators’ spiritual development while providing professional development pertinent to the field of education through scholars who have founded, led and worked in Islamic schools. This year Dr. Nadia Katrangi, a founding member of Arizona’s Good Tree Institute (https://www.goodtreeinstitute.com) and a lead scholar for all of its programming efforts, supplied the desired spiritual development through a series of workshops that engaged participants in an analysis of selected Quranic passages. After the final workshop, they walked away with a “road map” designed to help them navigate the challenges and opportunities that confront them in Islamic schools. During their excursion into the Natural Bridge Caverns, the educators immersed themselves in otherwise unseen wonders,

SCHOOL LEADERS ARE INUNDATED WITH DAILY CHALLENGES BY VARIED STAKEHOLDERS, INCLUDING ISSUES RELATED TO STAFF RETENTION, STUDENT DISCIPLINE, QUARTERLY BUDGETS AND TENSION WITH SCHOOL BOARDS. THUS, THE OPPORTUNITY TO REFLECT CAN BE RATHER HARD TO FIND IF IT IS NOT DELIBERATELY SOUGHT OUT.