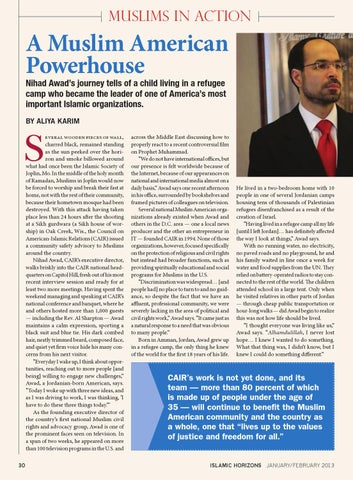 A Muslim American Powerhouse Nihad Awad’s journey tells of a child living in a refugee camp who became the leader of one of America’s most important Islamic organizations. By Aliya Karim

everal wooden pieces of wall, charred black, remained standing as the sun peeked over the horizon and smoke billowed around what had once been the Islamic Society of Joplin, Mo. In the middle of the holy month of Ramadan, Muslims in Joplin would now be forced to worship and break their fast at home, not with the rest of their community, because their hometown mosque had been destroyed. With this attack having taken place less than 24 hours after the shooting at a Sikh gurdwara (a Sikh house of worship) in Oak Creek, Wis., the Council on American-Islamic Relations (CAIR) issued a community safety advisory to Muslims around the country. Nihad Awad, CAIR’s executive director, walks briskly into the CAIR national headquarters on Capitol Hill, fresh out of his most recent interview session and ready for at least two more meetings. Having spent the weekend managing and speaking at CAIR’s national conference and banquet, where he and others hosted more than 1,000 guests — including the Rev. Al Sharpton — Awad maintains a calm expression, sporting a black suit and blue tie. His dark combed hair, neatly trimmed beard, composed face, and quiet yet firm voice hide his many concerns from his next visitor. “Everyday I wake up, I think about opportunities, reaching out to more people [and being] willing to engage new challenges,” Awad, a Jordanian-born American, says. “Today I woke up with three new ideas, and as I was driving to work, I was thinking, ‘I have to do these three things today.’” As the founding executive director of the country’s first national Muslim civil rights and advocacy group, Awad is one of the prominent faces seen on television. In a span of two weeks, he appeared on more than 100 television programs in the U.S. and

across the Middle East discussing how to properly react to a recent controversial film on Prophet Muhammad. “We do not have international offices, but our presence is felt worldwide because of the Internet, because of our appearances on national and international media almost on a daily basis,” Awad says one recent afternoon in his office, surrounded by bookshelves and framed pictures of colleagues on television. Several national Muslim American organizations already existed when Awad and others in the D.C. area — one a local news producer and the other an entrepreneur in IT — founded CAIR in 1994. None of those organizations, however, focused specifically on the protection of religious and civil rights but instead had broader functions, such as providing spiritually educational and social programs for Muslims in the U.S. “Discrimination was widespread… [and people had] no place to turn to and no guidance, so despite the fact that we have an affluent, professional community, we were severely lacking in the area of political and civil rights work,” Awad says. “It came just as a natural response to a need that was obvious to many people.” Born in Amman, Jordan, Awad grew up in a refugee camp, the only thing he knew of the world for the first 18 years of his life.

He lived in a two-bedroom home with 10 people in one of several Jordanian camps housing tens of thousands of Palestinian refugees disenfranchised as a result of the creation of Israel. “Having lived in a refugee camp all my life [until I left Jordan]… has definitely affected the way I look at things,” Awad says. With no running water, no electricity, no paved roads and no playground, he and his family waited in line once a week for water and food supplies from the UN. They relied on battery-operated radios to stay connected to the rest of the world. The children attended school in a large tent. Only when he visited relatives in other parts of Jordan — through cheap public transportation or hour-long walks — did Awad begin to realize this was not how life should be lived. “I thought everyone was living like us,” Awad says. “Alhamdulillah, I never lost hope… I knew I wanted to do something. What that thing was, I didn’t know, but I knew I could do something different.”

CAIR’s work is not yet done, and its team — more than 80 percent of which is made up of people under the age of 35 — will continue to benefit the Muslim American community and the country as a whole, one that “lives up to the values of justice and freedom for all.” Islamic Horizons  January/February 2013