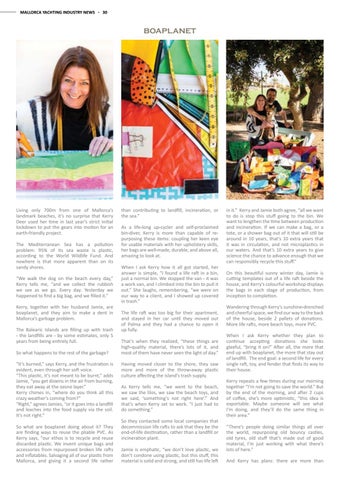 Living only 700m from one of Mallorca’s landmark beaches, it’s no surprise that Kerry Deer used her time in last year’s strict initial lockdown to put the gears into motion for an earth-friendly project. The Mediterranean Sea has a pollution problem: 95% of its sea waste is plastic, according to the World Wildlife Fund. And nowhere is that more apparent than on its sandy shores. “We walk the dog on the beach every day,” Kerry tells me, “and we collect the rubbish we see as we go. Every day. Yesterday we happened to find a big bag, and we filled it.” Kerry, together with her husband Jamie, are boaplanet, and they aim to make a dent in Mallorca’s garbage problem. The Balearic Islands are filling up with trash - the landfills are - by some estimates, only 5 years from being entirely full. So what happens to the rest of the garbage? “It’s burned,” says Kerry, and the frustration is evident, even through her soft voice. “This plastic, it’s not meant to be burnt,” adds Jamie, “you get dioxins in the air from burning, they eat away at the ozone layer.” Kerry chimes in, “where do you think all this crazy weather’s coming from?” “Right,” agrees Jamies, “or it goes into a landfill and leaches into the food supply via the soil. It’s not right.” So what are boaplanet doing about it? They are finding ways to reuse the pliable PVC. As Kerry says, “our ethos is to recycle and reuse discarded plastic. We invent unique bags and accessories from repurposed broken life rafts and inflatables. Salvaging all of our plastic from Mallorca, and giving it a second life rather

than contributing to landfill, incineration, or the sea.” As a life-long up-cycler and self-proclaimed bin-diver, Kerry is more than capable of repurposing these items: coupling her keen eye for usable materials with her upholstery skills, her bags are well-made, durable, and above all, amazing to look at. When I ask Kerry how it all got started, her answer is simple, “I found a life raft in a bin, just a normal bin. We stopped the van - it was a work van, and I climbed into the bin to pull it out.” She laughs, remembering, “we were on our way to a client, and I showed up covered in trash.” The life raft was too big for their apartment, and stayed in her car until they moved out of Palma and they had a chance to open it up fully. That’s when they realized, “these things are high-quality material, there’s lots of it, and most of them have never seen the light of day.” Having moved closer to the shore, they saw more and more of the throw-away plastic culture affecting the island’s trash supply. As Kerry tells me, “we went to the beach, we saw the lilos, we saw the beach toys, and we said, ‘something’s not right here’.” And that’s when Kerry set to work. “I just had to do something.” So they contacted some local companies that decommission life rafts to ask that they be the end-of-life destination, rather than a landfill or incineration plant. Jamie is emphatic, “we don’t love plastic, we don’t condone using plastic, but this stuff, this material is solid and strong, and still has life left

in it.” Kerry and Jamie both agree, “all we want to do is stop this stuff going to the bin. We want to lengthen the time between production and incineration. If we can make a bag, or a tote, or a shower bag out of it that will still be around in 10 years, that’s 10 extra years that it was in circulation, and not microplastics in our waters. And that’s 10 extra years to give science the chance to advance enough that we can responsibly recycle this stuff.” On this beautiful sunny winter day, Jamie is cutting templates out of a life raft beside the house, and Kerry’s colourful workshop displays the bags in each stage of production, from inception to completion. Wandering through Kerry’s sunshine-drenched and cheerful space, we find our way to the back of the house, beside 2 pallets of donations. More life rafts, more beach toys, more PVC. When I ask Kerry whether they plan to continue accepting donations she looks gleeful, “bring it on!” After all, the more that end up with boaplanet, the more that stay out of landfill. The end goal: a second life for every single raft, toy, and fender that finds its way to their house. Kerry repeats a few times during our morning together “I’m not going to save the world.” But by the end of the morning, and after 2 cups of coffee, she’s more optimistic, “this idea is exportable. Maybe someone will see what I’m doing, and they’ll do the same thing in their area.” “There’s people doing similar things all over the world, repurposing old bouncy castles, old tyres, old stuff that’s made out of good material, I’m just working with what there’s lots of here.” And Kerry has plans: there are more than