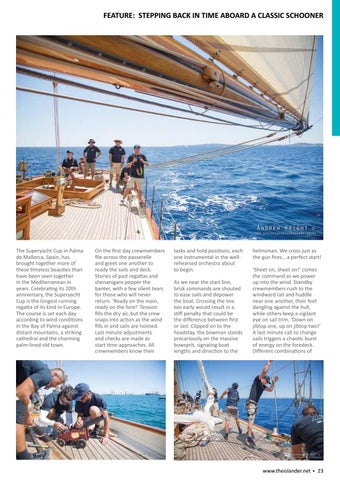 FEATURE: STEPPING BACK IN TIME ABOARD A CLASSIC SCHOONER

The Superyacht Cup in Palma de Mallorca, Spain, has brought together more of these timeless beauties than have been seen together in the Mediterranean in years. Celebrating its 20th anniversary, the Superyacht Cup is the longest running regatta of its kind in Europe. The course is set each day according to wind conditions in the Bay of Palma against distant mountains, a striking cathedral and the charming palm-lined old town.

On the first day crewmembers file across the passerelle and greet one another to ready the sails and deck. Stories of past regattas and shenanigans pepper the banter, with a few silent tears for those who will never return. ‘Ready on the main, ready on the fore!’ Tension fills the dry air, but the crew snaps into action as the wind fills in and sails are hoisted. Last minute adjustments and checks are made as start time approaches. All crewmembers know their

tasks and hold positions, each one instrumental in the wellrehearsed orchestra about to begin. As we near the start line, brisk commands are shouted to ease sails and depower the boat. Crossing the line too early would result in a stiff penalty that could be the difference between first or last. Clipped on to the headstay, the bowman stands precariously on the massive bowsprit, signaling boat lengths and direction to the

helmsman. We cross just as the gun fires… a perfect start! ‘Sheet on, sheet on!’ comes the command as we power up into the wind. Standby crewmembers rush to the windward rail and huddle near one another, their feet dangling against the hull, while others keep a vigilant eye on sail trim. ‘Down on jibtop one, up on jibtop two!’ A last minute call to change sails triggers a chaotic burst of energy on the foredeck. Different combinations of