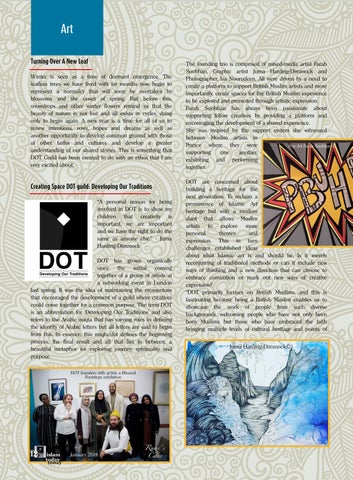 Art Turning Over A New Leaf

Winter is seen as a time of dormant emergence. The leafless trees we have lived with for months now begin to represent a normalcy that will soon be overtaken by blossoms and the onset of spring. But before this, snowdrops and other winter flowers remind us that the beauty of nature is not lost and all exists in cycles, dying only to begin again. A new year is a time for all of us to renew intentions, vows, hopes and dreams as well as another opportunity to develop common ground with those of other faiths and cultures and develop a greater understanding of our shared stories. This is something that DOT Guild has been created to do with an ethos that I am very excited about. Creating Space DOT guild: Developing Our Traditions

“A personal reason for being involved in DOT is to show my children that creativity is important, we are important and we have the right to do the same as anyone else.” - Juma Harding-Dimmock DOT has grown organically since the initial coming together of a group of artists at a networking event in London last spring. It was the idea of maintaining the momentum that encouraged the development of a guild where creatives could come together for a common purpose. The term DOT is an abbreviation for ‘Developing Our Traditions’ and also refers to the Arabic nuqta that has varying roles in defining the identity of Arabic letters but all letters are said to begin from this. In essence, this nuqta/dot defines the beginning process, the final result and all that lies in between, a beautiful metaphor for exploring journey, spirituality and purpose. DOT founders with artists a Blessed Footsteps exhibition

The founding trio is comprised of mixed-media artist Farah Soobhan, Graphic artist Juma Harding-Dimmock and Photographer, Isa Noorudeen. All were driven by a need to create a platform to support British Muslim artists and more importantly, create spaces for the British Muslim experience to be explored and promoted through artistic expression. Farah Soobhan has always been passionate about supporting fellow creatives by providing a platform and encouraging the development of a shared experience. She was inspired by the support system she witnessed between Muslim artists in France where they were Pop Art Farah Soobhan © supporting one another, exhibiting and performing together. DOT are concerned about building a heritage for the next generation. To reclaim a prominence of Islamic Art heritage but with a modern slant that allows Muslim artists to explore more personal themes and expression. This in turn challenges established ideas about what Islamic art is and should be. Is it merely reconjurring of traditional methods or can it include new ways of thinking and a new direction that can choose to embrace convention or mark out new ways of creative expression? “DOT primarily focuses on British Muslims, and this is fascinating because being a British Muslim enables us to showcase the work of people from such diverse backgrounds, welcoming people who have not only been born Muslims but those who have embraced the faith bringing multiple levels of cultural heritage and points of Juma Harding-Dimmock© 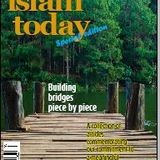