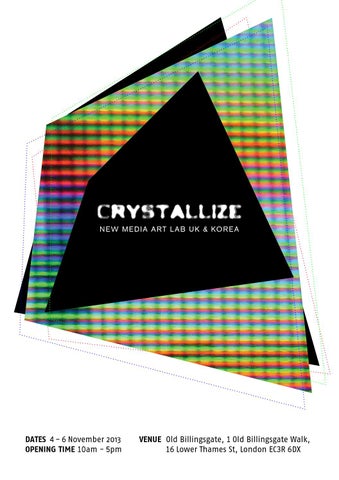 JEREMY BAILEY _ THE FUTURE OF TELEVISION Crystallize features the “Famous New Media Artist” Jeremy Bailey who is regarded as an artist who evokes the spirit of Nam June Paik most. His work explores custom software in a performative context, offering parodies of new media vocabularies. ‘Future of Television’ uses facial recognition technology to show television channels on his face. Whilst the same technology would apply to self-driven cars in the future, it is the self-depreciating manner and fun that he uses the technique to question the place of television in artists’ work at present and touches self-promoting culture by being “user-controlled”.

JE BAAK _ THE STRUCTURE OF â&#x20AC;&#x2DC;The Structure of â&#x20AC;&#x2122; presents a concept that there are only two artificially generated extreme emotions that people can feel when on thrill rides in an amusement park. Whether it is fear or pleasure, collages of all the different types of thrill rides, Je Baak creates figures that evoke these mixed emotions. The feel of emptiness also occurs whilst the endless repetition somehow changes thrill into pain. They look beautiful yet scary, enjoyable yet painful at the same time.

GINA CZARNECKI _ PALACES Gina Czarnecki’s ‘Palaces’ is a public participatory sculpture made in collaboration with Professor Sara Rankin from Imperial College.  The palace grows as the thousands of baby teeth, donated by children around the world are attached and preserved within the crystal resin sculpture. Palaces is part of a larger body of art called The Wasted Works, that looks at recycling of organs and tissue, legislation and medical research, stem cell therapy, the notion of ownership applied to ‘clinical waste’ and our understanding of informed consent.

GLTI.CH (http://glti.ch) is a co between Kyougn Kmi and Da breaches hopeless distances technical make-dos. The wor together in glitchy karaoke fe haps, and other kludged-toge

Starting at 9AM on 4th Novem open GLTI.CH PORTALS onto 6 telepresent karaoke in the Ol Market, London. GLTI.CH POR access points that connect th New Media Art Exhibition to t Korea Brand and Entertainme interacting with these GLTI.CH will be able to sing with beds Francisco, offices in Boston a galleries in New York, Zurich Following the labyrinth below outside, locally /globally, GLT thread the internet with the s song.

mber, Crystallize will 67 hours of multi-user ld Billingsgate RTALS will feature he lower level of the the upper floor of the ent Expo. By H PORTALS, visitors sits in Seoul and San and Manchester, and beyond! w/above, inside/ LTI.CH PORTALS will starts and stutters of

DAVID OGLE _ 08024 David Ogle’s work deals with notions of permanence, perception and the materiality of objects. Light acts as a sculptural medium in much of the work, with spaces becoming intersected and manipulated by geometric forms that distort a viewer’s perception of their environment and their navigations around it. The works are innately ephemeral, each constructed within the parameters of a specific site for a specific time – a context from which the work is inseparable.

Ayoung Kim presents a thr Korean song of the same ti rising to its peak; moreove international events such a prosperity also brought ab who used to be a drug smu in a semi-realistic way. Usi archival footage of running advancement is.

ree-channel video, set in the late 80s, using a well-known old-fashioned itle. It was the period when the South Korean economy seemed to be er, optimism about globalisation was dominant as the country held as the Olympic Games and the Asian Games. Yet such seeming bout darker aspects into everyday life. Intrigued by a real story of a man uggler in the city of Busan, it re-shapes and reconstructs a day of his life ing footage taken from location shooting and studio shooting as well as g sportsmen, it questions upon what the meaning of endless

SANG UN JEON _ TRAILERS ARCHIVE, VIRTUAL CITY Sang Un Jeon witnesses that every cultural idea is communicated and transmitted from one mind to another with an unprecedented speed. Jeon focuses on the visualization of hybridized visual culture, creating the most unexpected objects. 7

Kira Kim metaphorical piece uses photography, video, LED and other new media in his socially focused but humorous work. Ranging from organised gang members and exercising housewives to multi-national fast food joints and oriental china, his subject matters show the diverse yet somewhat standardised characteristics of modern life. Kira throws a camera from 29th floor of a building, then from a bridge and the work is generated from these actions.

Suhee Kimâ&#x20AC;&#x2122;s video Meaning Imageâ&#x20AC;&#x2122; o view from a reade to understand the author by a readin passes and as the non-understanda begin to disappea words that have g the reader survive the page with man make sense and i abstract image, as exist a way to pres

o installation â&#x20AC;&#x2DC;Text offers an account er who is trying e thoughts of an ng text. As time e reader reads, able words for him ar. Finally, only the given a meaning to e but the text on ny voids does not it becomes an s if there did not sent pure thought.

Terry Ryu Kim looks at the technology and architecture of social spaces and their controlling effect on movement as well as exploring the body as it is represented through surveillance and considered in design. When some aspects of public spaces where surveillance and host-guest relationship is crucial, such as hospitals, airports and public transport: Kim manipulates screens to accentuate their presence, references liminal, functional zones in interiors such as revolving doors, while the long rows of screens create an artificial and provisional corridor controlling the viewerâ&#x20AC;&#x2122;s entry into the space.

LEENAM LEE _ BATTLE OF SEOLMARI Leenam Leeâ&#x20AC;&#x2122;s cartoon screens combine classical painting with digital technology. Using the five pieces of an oriental folding screen as digital screens, past classic art work is brought to life, heavily embedded with symbols expressing the passing of time, causes and consequences from analog to a digital world.

Dave Lynchâ&#x20AC;&#x2122;s mobile pro depiction of expanded c questions the role of the human interpretation of

Lynch showcases variou cloud projection researc including his new protot drone technology. He wi throughout the lab cond based research into cros collaboration between a maker cultures.

ojection series is a cinema and e image and the data in our culture.

us devices from his ch over the past year type piece involving ill also be resident ducting conversation ss disciplinary art, science and

SAM MEECH _ KNITTED HORSE IN MOTION Sam Meech uses domestic knitting machines to explore the parallels between digital images and textiles. Using both punchcard-operated and ‘hacked’ electronic machines, Meech looks at ways in which the devices can be used to develop simple moving image experiments alongside analogue interpretations of digital video compression. He is also looking at the uses of the punchcard as a means for controlling workers and is currently auditing contemporary working patterns within the digital economy, revealing the shift from Robert Owens’ ideal - ‘8 hours labour, 8 hours recreation, 8 hours rest’.

SEMICONDUCTOR _ WORLDS IN THE MAKING â&#x20AC;&#x2DC;Worlds in the Makingâ&#x20AC;&#x2122; is an epic three channel moving image work by Semiconductor that explores how we observe, experience and create an understanding of the physical origins of the world around us. By appropriating the tools and processes of volcanology to re-interpret the primordial landscapes of our volcanic planet, Semiconductor create a world slightly removed from the one we think we know, disrupting our everyday assumptions of reality and questioning how science affects our experience of natural world.

PAUL SULLIVAN _ NOODLE BAR In 2008-2009, Static Gallery carried out a project with its roots in 19th century painter Manet’s ‘A bar at the Folies Bergere’, using an artwork as a mirror to reflect society. The project plots the setting up of a noodle bar on the outside of the gallery in Liverpool to be staffed by a Korean family selected by application. The project explores not only the technical, legal and bureaucratic frameworks of movement within a globalized society, but also the emotions and desires that lie behind migration.