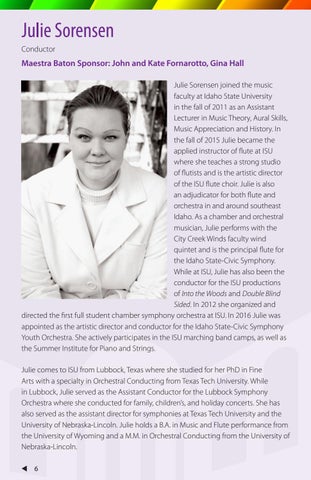 Maestra Baton Sponsor: John and Kate Fornarotto, Gina Hall Julie Sorensen joined the music faculty at Idaho State University in the fall of 2011 as an Assistant Lecturer in Music Theory, Aural Skills, Music Appreciation and History. In the fall of 2015 Julie became the applied instructor of flute at ISU where she teaches a strong studio of flutists and is the artistic director of the ISU flute choir. Julie is also an adjudicator for both flute and orchestra in and around southeast Idaho. As a chamber and orchestral musician, Julie performs with the City Creek Winds faculty wind quintet and is the principal flute for the Idaho State-Civic Symphony. While at ISU, Julie has also been the conductor for the ISU productions of Into the Woods and Double Blind Sided. In 2012 she organized and directed the first full student chamber symphony orchestra at ISU. In 2016 Julie was appointed as the artistic director and conductor for the Idaho State-Civic Symphony Youth Orchestra. She actively participates in the ISU marching band camps, as well as the Summer Institute for Piano and Strings. Julie comes to ISU from Lubbock, Texas where she studied for her PhD in Fine Arts with a specialty in Orchestral Conducting from Texas Tech University. While in Lubbock, Julie served as the Assistant Conductor for the Lubbock Symphony Orchestra where she conducted for family, childrenâ&#x20AC;&#x2122;s, and holiday concerts. She has also served as the assistant director for symphonies at Texas Tech University and the University of Nebraska-Lincoln. Julie holds a B.A. in Music and Flute performance from the University of Wyoming and a M.M. in Orchestral Conducting from the University of Nebraska-Lincoln. ď ´ 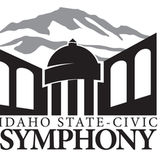