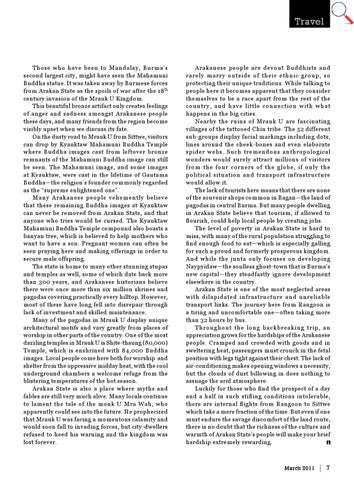 Those who have been to Mandalay, Burma’s second largest city, might have seen the Mahamuni Buddha statue. It was taken away by Burmese forces from Arakan State as the spoils of war after the 18th century invasion of the Mrauk U Kingdom. This beautiful bronze artifact only creates feelings of anger and sadness amongst Arakanese people these days, and many friends from the region become visibly upset when we discuss its fate. On the dusty road to Mrauk U from Sittwe, visitors can drop by Kyauktaw Mahamuni Buddha Temple where Buddha images cast from leftover bronze remnants of the Mahamuni Buddha image can still be seen. The Mahamuni image, and some images at Kyauktaw, were cast in the lifetime of Gautama Buddha—the religion’s founder commonly regarded as the “supreme enlightened one”. Many Arakanese people vehemently believe that these remaining Buddha images at Kyauktaw can never be removed from Arakan State, and that anyone who tries would be cursed. The Kyauktaw Mahamuni Buddha Temple compound also boasts a banyan tree, which is believed to help mothers who want to have a son. Pregnant women can often be seen praying here and making offerings in order to secure male offspring. The state is home to many other stunning stupas and temples as well, some of which date back more than 300 years, and Arakanese historians believe there were once more than six million shrines and pagodas covering practically every hilltop. However, most of these have long fell into disrepair through lack of investment and skilled maintenance. Many of the pagodas in Mrauk U display unique architectural motifs and vary greatly from places of worship in other parts of the country. One of the most dazzling temples in Mrauk U is Shite-thaung (80,000) Temple, which is enshrined with 84,000 Buddha images. Local people come here both for worship and shelter from the oppressive midday heat, with the cool underground chambers a welcome refuge from the blistering temperatures of the hot season. Arakan State is also a place where myths and fables are still very much alive. Many locals continue to lament the tale of the monk U Mra Wah, who apparently could see into the future. He prophecized that Mrauk U was facing a momentous calamity and would soon fall to invading forces, but city-dwellers refused to heed his warning and the kingdom was lost forever.

Arakanese people are devout Buddhists and rarely marry outside of their ethnic group, so protecting their unique traditions. While talking to people here it becomes apparent that they consider themselves to be a race apart from the rest of the country, and have little connection with what happens in the big cities. Nearby the ruins of Mrauk U are fascinating villages of the tattooed Chin tribe. The 52 different sub-groups display facial markings including dots, lines around the cheek-bones and even elaborate spider webs. Such tremendous anthropological wonders would surely attract millions of visitors from the four corners of the globe, if only the political situation and transport infrastructure would allow it. The lack of tourists here means that there are none of the souvenir shops common in Bagan—the land of pagodas in central Burma. But many people dwelling in Arakan State believe that tourism, if allowed to flourish, could help local people by creating jobs. The level of poverty in Arakan State is hard to miss, with many of the rural population struggling to find enough food to eat—which is especially galling for such a proud and formerly prosperous kingdom. And while the junta only focuses on developing Naypyidaw—the soulless ghost-town that is Burma’s new capital—they steadfastly ignore development elsewhere in the country. Arakan State is one of the most neglected areas with dilapidated infrastructure and unreliable transport links. The journey here from Rangoon is a tiring and uncomfortable one—often taking more than 32 hours by bus. Throughout the long backbreaking trip, an appreciation grows for the hardships of the Arakanese people. Cramped and crowded with goods and in sweltering heat, passengers must crouch in the fetal position with legs tight against their chest. The lack of air-conditioning makes opening windows a necessity, but the clouds of dust billowing in does nothing to assuage the arid atmosphere. Luckily for those who find the prospect of a day and a half in such stifling conditions intolerable, there are internal flights from Rangoon to Sittwe which take a mere fraction of the time. But even if one must endure the savage discomfort of the land route, there is no doubt that the richness of the culture and warmth of Arakan State’s people will make your brief hardship extremely rewarding.