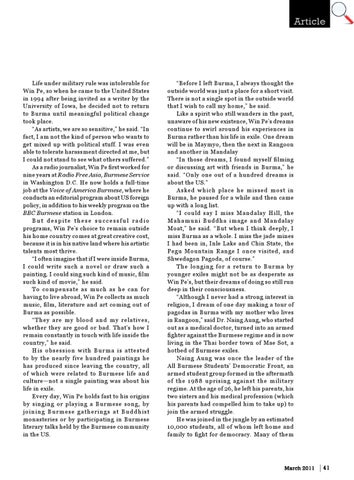 Life under military rule was intolerable for Win Pe, so when he came to the United States in 1994 after being invited as a writer by the University of Iowa, he decided not to return to Burma until meaningful political change took place. “As artists, we are so sensitive,” he said. “In fact, I am not the kind of person who wants to get mixed up with political stuff. I was even able to tolerate harassment directed at me, but I could not stand to see what others suffered.” As a radio journalist, Win Pe first worked for nine years at Radio Free Asia, Burmese Service in Washington D.C. He now holds a full-time job at the Voice of America Burmese, where he conducts an editorial program about US foreign policy, in addition to his weekly program on the BBC Burmese station in London. But despite these successful radio programs, Win Pe’s choice to remain outside his home country comes at great creative cost, because it is in his native land where his artistic talents most thrive. “I often imagine that if I were inside Burma, I could write such a novel or draw such a painting. I could sing such kind of music, film such kind of movie,” he said. To compensate as much as he can for having to live abroad, Win Pe collects as much music, film, literature and art coming out of Burma as possible. “They are my blood and my relatives, whether they are good or bad. That’s how I remain constantly in touch with life inside the country,” he said. His obsession with Burma is attested to by the nearly five hundred paintings he has produced since leaving the country, all of which were related to Burmese life and culture—not a single painting was about his life in exile. Every day, Win Pe holds fast to his origins by singing or playing a Burmese song, by joining Burmese gatherings at Buddhist monasteries or by participating in Burmese literary talks held by the Burmese community in the US.

“Before I left Burma, I always thought the outside world was just a place for a short visit. There is not a single spot in the outside world that I wish to call my home,” he said. Like a spirit who still wanders in the past, unaware of his new existence, Win Pe’s dreams continue to swirl around his experiences in Burma rather than his life in exile. One dream will be in Maymyo, then the next in Rangoon and another in Mandalay “In those dreams, I found myself filming or discussing art with friends in Burma,” he said. “Only one out of a hundred dreams is about the US.” Asked which place he missed most in Burma, he paused for a while and then came up with a long list. “I could say I miss Mandalay Hill, the Mahamuni Buddha image and Mandalay Moat,” he said. “But when I think deeply, I miss Burma as a whole. I miss the jade mines I had been in, Inle Lake and Chin State, the Pegu Mountain Range I once visited, and Shwedagon Pagoda, of course.” The longing for a return to Burma by younger exiles might not be as desperate as Win Pe’s, but their dreams of doing so still run deep in their consciousness. “Although I never had a strong interest in religion, I dream of one day making a tour of pagodas in Burma with my mother who lives in Rangoon,” said Dr. Naing Aung, who started out as a medical doctor, turned into an armed fighter against the Burmese regime and is now living in the Thai border town of Mae Sot, a hotbed of Burmese exiles. Naing Aung was once the leader of the All Burmese Students’ Democratic Front, an armed student group formed in the aftermath of the 1988 uprising against the military regime. At the age of 26, he left his parents, his two sisters and his medical profession (which his parents had compelled him to take up) to join the armed struggle. He was joined in the jungle by an estimated 10,000 students, all of whom left home and family to fight for democracy. Many of them