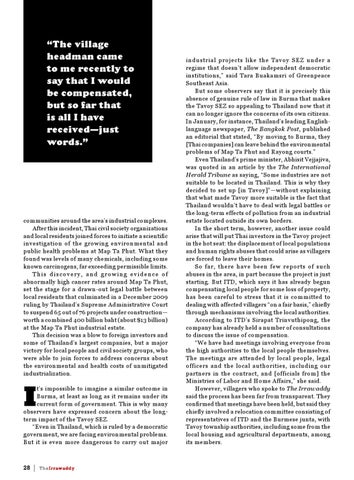 “The village headman came to me recently to say that I would be compensated, but so far that is all I have received—just words.”

communities around the area’s industrial complexes. After this incident, Thai civil society organizations and local residents joined forces to initiate a scientific investigation of the growing environmental and public health problems at Map Ta Phut. What they found was levels of many chemicals, including some known carcinogens, far exceeding permissible limits. This discovery, and growing evidence of abnormally high cancer rates around Map Ta Phut, set the stage for a drawn-out legal battle between local residents that culminated in a December 2009 ruling by Thailand’s Supreme Administrative Court to suspend 65 out of 76 projects under construction— worth a combined 400 billion baht (about $13 billion) at the Map Ta Phut industrial estate. This decision was a blow to foreign investors and some of Thailand’s largest companies, but a major victory for local people and civil society groups, who were able to join forces to address concerns about the environmental and health costs of unmitigated industrialization.

t’s impossible to imagine a similar outcome in Burma, at least as long as it remains under its current form of government. This is why many observers have expressed concern about the longterm impact of the Tavoy SEZ. “Even in Thailand, which is ruled by a democratic government, we are facing environmental problems. But it is even more dangerous to carry out major

industrial projects like the Tavoy SEZ under a regime that doesn’t allow independent democratic institutions,” said Tara Buakamsri of Greenpeace Southeast Asia. But some observers say that it is precisely this absence of genuine rule of law in Burma that makes the Tavoy SEZ so appealing to Thailand now that it can no longer ignore the concerns of its own citizens. In January, for instance, Thailand’s leading Englishlanguage newspaper, The Bangkok Post, published an editorial that stated, “By moving to Burma, they [Thai companies] can leave behind the environmental problems of Map Ta Phut and Rayong courts.” Even Thailand’s prime minister, Abhisit Vejjajiva, was quoted in an article by the The International Herald Tribune as saying, “Some industries are not suitable to be located in Thailand. This is why they decided to set up [in Tavoy]”—without explaining that what made Tavoy more suitable is the fact that Thailand wouldn’t have to deal with legal battles or the long-term effects of pollution from an industrial estate located outside its own borders. In the short term, however, another issue could arise that will put Thai investors in the Tavoy project in the hot seat: the displacement of local populations and human rights abuses that could arise as villagers are forced to leave their homes. So far, there have been few reports of such abuses in the area, in part because the project is just starting. But ITD, which says it has already begun compensating local people for some loss of property, has been careful to stress that it is committed to dealing with affected villagers “on a fair basis,” chiefly through mechanisms involving the local authorities. According to ITD’s Sirapat Trinvuthipong, the company has already held a number of consultations to discuss the issue of compensation. “We have had meetings involving everyone from the high authorities to the local people themselves. The meetings are attended by local people, legal officers and the local authorities, including our partners in the contract, and [officials from] the Ministries of Labor and Home Affairs,” she said. However, villagers who spoke to The Irrawaddy said the process has been far from transparent. They confirmed that meetings have been held, but said they chiefly involved a relocation committee consisting of representatives of ITD and the Burmese junta, with Tavoy township authorities, including some from the local housing and agricultural departments, among its members.