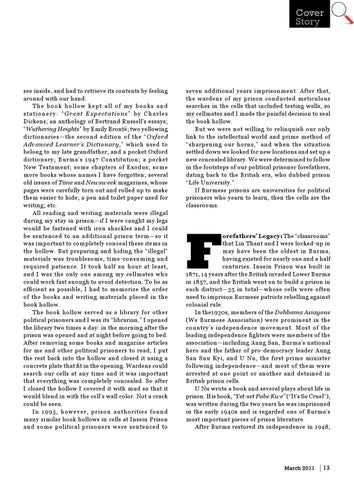 see inside, and had to retrieve its contents by feeling around with our hand. The book hollow kept all of my books and stationery: “Great Expectations” by Charles Dickens; an anthology of Bertrand Russell’s essays; “Wuthering Heights” by Emily Brontё; two yellowing dictionaries—the second edition of the “Oxford Advanced Learner’s Dictionary,” which used to belong to my late grandfather, and a pocket Oxford dictionary; Burma’s 1947 Constitution; a pocket New Testament; some chapters of Exodus; some more books whose names I have forgotten; several old issues of Time and Newsweek magazines, whose pages were carefully torn out and rolled up to make them easier to hide; a pen and toilet paper used for writing; etc. All reading and writing materials were illegal during my stay in prison—if I were caught my legs would be fastened with iron shackles and I could be sentenced to an additional prison term—so it was important to completely conceal these items in the hollow. But preparing and hiding the “illegal” materials was troublesome, time-consuming and required patience. It took half an hour at least, and I was the only one among my cellmates who could work fast enough to avoid detection. To be as efficient as possible, I had to memorize the order of the books and writing materials placed in the book hollow. The book hollow served as a library for other political prisoners and I was its “librarian.” I opened the library two times a day: in the morning after the prison was opened and at night before going to bed. After removing some books and magazine articles for me and other political prisoners to read, I put the rest back into the hollow and closed it using a concrete plate that fit in the opening. Wardens could search our cells at any time and it was important that everything was completely concealed. So after I closed the hollow I covered it with mud so that it would blend in with the cell’s wall color. Not a crack could be seen. In 1995, however, prison authorities found many similar book hollows in cells at Insein Prison and some political prisoners were sentenced to

seven additional years imprisonment. After that, the wardens of my prison conducted meticulous searches in the cells that included testing walls, so my cellmates and I made the painful decision to seal the book hollow. But we were not willing to relinquish our only link to the intellectual world and prime method of “sharpening our horns,” and when the situation settled down we looked for new locations and set up a new concealed library. We were determined to follow in the footsteps of our political prisoner forefathers, dating back to the British era, who dubbed prison “Life University.” If Burmese prisons are universities for political prisoners who yearn to learn, then the cells are the classrooms.

orefathers’ Legacy: The “classrooms” that Lin Thant and I were locked-up in may have been the oldest in Burma, having existed for nearly one and a half centuries. Insein Prison was built in 1871, 14 years after the British invaded Lower Burma in 1857, and the British went on to build a prison in each district—35 in total—whose cells were often used to imprison Burmese patriots rebelling against colonial rule. In the1930s, members of the Dohbama Asiayone (We Burmese Association) were prominent in the country’s independence movement. Most of the leading independence fighters were members of the association—including Aung San, Burma’s national hero and the father of pro-democracy leader Aung San Suu Kyi, and U Nu, the first prime minister following independence—and most of them were arrested at one point or another and detained in British prison cells. U Nu wrote a book and several plays about life in prison. His book, “Yet-set Pabe Kwe” (“It’s So Cruel”), was written during the two years he was imprisoned in the early 1940s and is regarded one of Burma’s most important pieces of prison literature. After Burma restored its independence in 1948,