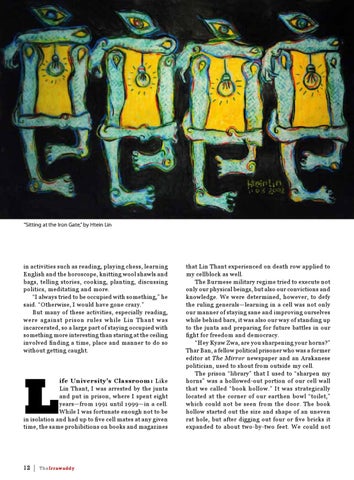 “Sitting at the Iron Gate,” by Htein Lin

in activities such as reading, playing chess, learning English and the horoscope, knitting wool shawls and bags, telling stories, cooking, planting, discussing politics, meditating and more. “I always tried to be occupied with something,” he said. “Otherwise, I would have gone crazy.” But many of these activities, especially reading, were against prison rules while Lin Thant was incarcerated, so a large part of staying occupied with something more interesting than staring at the ceiling involved finding a time, place and manner to do so without getting caught.

ife University’s Classroom: Like Lin Thant, I was arrested by the junta and put in prison, where I spent eight years—from 1991 until 1999—in a cell. While I was fortunate enough not to be in isolation and had up to five cell mates at any given time, the same prohibitions on books and magazines

that Lin Thant experienced on death row applied to my cellblock as well. The Burmese military regime tried to execute not only our physical beings, but also our convictions and knowledge. We were determined, however, to defy the ruling generals—learning in a cell was not only our manner of staying sane and improving ourselves while behind bars, it was also our way of standing up to the junta and preparing for future battles in our fight for freedom and democracy. “Hey Kyaw Zwa, are you sharpening your horns?” Thar Ban, a fellow political prisoner who was a former editor at The Mirror newspaper and an Arakanese politician, used to shout from outside my cell. The prison “library” that I used to “sharpen my horns” was a hollowed-out portion of our cell wall that we called “book hollow.” It was strategically located at the corner of our earthen bowl “toilet,” which could not be seen from the door. The book hollow started out the size and shape of an uneven rat hole, but after digging out four or five bricks it expanded to about two-by-two feet. We could not