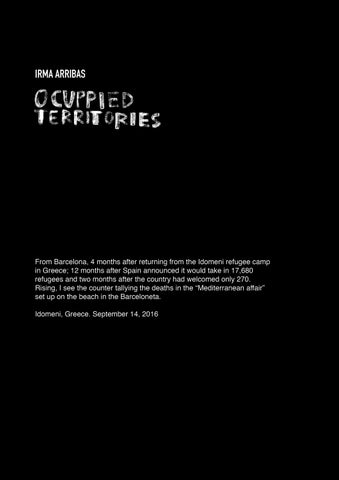 From Barcelona, 4 months after returning from the Idomeni refugee camp in Greece; 12 months after Spain announced it would take in 17,680 refugees and two months after the country had welcomed only 270. Rising, I see the counter tallying the deaths in the â&amp;#x20AC;&amp;#x153;Mediterranean affairâ&amp;#x20AC;? set up on the beach in the Barceloneta. Idomeni, Greece. September 14, 2016

We live in a “MacroSoft Excel(lent)” territory that moves at a quantitative rhythm, which lets us participate in super sexy activities that help us cleanse our souls through gentle displacement and numeric movements of impure matter: charities starting at a dollar ninety-nine, thirty (plus) TV channels with blinding information, two-for-one offers on environmental abuses, etc. But all that is sexy melts into air, when the movement endangers comfort, which has a bearing on: don’t touch me/my stuff.

“The day they touch one of my men, the rule of law is over.” A. Pinochet (the passion killer).

It’s time to get out the PlayStation controllers to beat levels, moving matter from one place to another without touching anything, at a distance, while “for your own safety, do not to leave your baggage unattended at any time”.

Whereas some – are displaced – risking their lives, others – displace – to purge their death, blackening their souls and cleansing their houses.

There are others who risk it all, drawing without making drawings. Moving to the next screen without accumulating quantitative data, but inheriting lines as qualitative strokes. A purgatory that is meant to save the souls of currently dead spaces, attacked by politics, culture and the economy, which deserve to be cleansed in an ascent to glory. A task rooted in architectural responsibility that doesnâ&amp;#x20AC;&amp;#x2122;t follow the building code, but the code of ethics. To cleanse by drawing, creating an emergence of meaning, an approach to the frequencies, a space for exploration, a state of connection, an erasure that makes something appear, building to tear down.Drawing as communication, defending the rights of existences, revealing the architectural ability to create states, decrying violations in the forms of spatial relationships. There are people who live in purgatory alive, helping to purge what they believe in.

OCCUPIED TERRITORIES: the territories that are generated by the evolution of the refugee camps, doubting which side of the observer the emergency situation is, reflect themes related to migratory movements and the configuration of the territory. This is the written document that together with the video OCCUPIED TERRITORIES (vimeo: Irma Arribas) was part of the program: Imageries of Social Actions at the Greek Pavilion on the 15th International Architecture Exhibition-La Biennale di Venezia 2016. 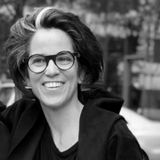