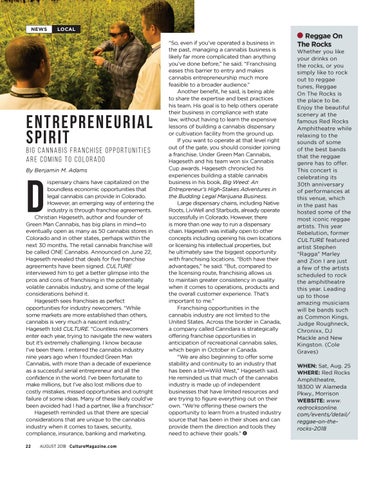 ispensary chains have capitalized on the boundless economic opportunities that legal cannabis can provide in Colorado. However, an emerging way of entering the industry is through franchise agreements. Christian Hageseth, author and founder of Green Man Cannabis, has big plans in mind—to eventually open as many as 50 cannabis stores in Colorado and in other states, perhaps within the next 30 months. The retail cannabis franchise will be called ONE Cannabis. Announced on June 22, Hageseth revealed that deals for five franchise agreements have been signed. CULTURE interviewed him to get a better glimpse into the pros and cons of franchising in the potentially volatile cannabis industry, and some of the legal considerations behind it. Hageseth sees franchises as perfect opportunities for industry newcomers. “While some markets are more established than others, cannabis is very much a nascent industry,” Hageseth told CULTURE. “Countless newcomers enter each year, trying to navigate the new waters but it’s extremely challenging. I know because I’ve been there. I entered the cannabis industry nine years ago when I founded Green Man Cannabis, with more than a decade of experience as a successful serial entrepreneur and all the confidence in the world. I’ve been fortunate to make millions, but I’ve also lost millions due to costly mistakes, missed opportunities and outright failure of some ideas. Many of these likely could’ve been avoided had I had a partner, like a franchisor.” Hageseth reminded us that there are special considerations that are unique to the cannabis industry when it comes to taxes, security, compliance, insurance, banking and marketing. 22

“So, even if you’ve operated a business in the past, managing a cannabis business is likely far more complicated than anything you’ve done before,” he said. “Franchising eases this barrier to entry and makes cannabis entrepreneurship much more feasible to a broader audience.” Another benefit, he said, is being able to share the expertise and best practices his team. His goal is to help others operate their business in compliance with state law, without having to learn the expensive lessons of building a cannabis dispensary or cultivation facility from the ground up. If you want to operate at that level right out of the gate, you should consider joining a franchise. Under Green Man Cannabis, Hageseth and his team won six Cannabis Cup awards. Hageseth chronicled his experiences building a stable cannabis business in his book, Big Weed: An Entrepreneur’s High-Stakes Adventures in the Budding Legal Marijuana Business. Large dispensary chains, including Native Roots, LivWell and Starbuds, already operate successfully in Colorado. However, there is more than one way to run a dispensary chain. Hageseth was initially open to other concepts including opening his own locations or licensing his intellectual properties, but he ultimately saw the biggest opportunity with franchising locations. “Both have their advantages,” he said. “But, compared to the licensing route, franchising allows us to maintain greater consistency in quality when it comes to operations, products and the overall customer experience. That’s important to me.” Franchising opportunities in the cannabis industry are not limited to the United States. Across the border in Canada, a company called Canndara is strategically offering franchise opportunities in anticipation of recreational cannabis sales, which begin in October in Canada. “We are also beginning to offer some stability and continuity to an industry that has been a bit—Wild West,” Hageseth said. He reminded us that much of the cannabis industry is made up of independent businesses that have limited resources and are trying to figure everything out on their own. “We’re offering these owners the opportunity to learn from a trusted industry source that has been in their shoes and can provide them the direction and tools they need to achieve their goals.” c

Reggae On The Rocks Whether you like your drinks on the rocks, or you simply like to rock out to reggae tunes, Reggae On The Rocks is the place to be. Enjoy the beautiful scenery at the famous Red Rocks Amphitheatre while relaxing to the sounds of some of the best bands that the reggae genre has to offer. This concert is celebrating its 30th anniversary of performances at this venue, which in the past has hosted some of the most iconic reggae artists. This year Rebelution, former CULTURE featured artist Stephen “Ragga” Marley and Zion I are just a few of the artists scheduled to rock the amphitheatre this year. Leading up to those amazing musicians will be bands such as Common Kings, Judge Roughneck, Chronixx, DJ Mackle and New Kingston. (Cole Graves) WHEN: Sat, Aug. 25 WHERE: Red Rocks Amphitheatre, 18300 W Alameda Pkwy., Morrison WEBSITE: www. redrocksonline. com/events/detail/ reggae-on-therocks-2018 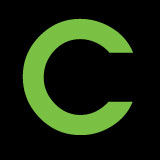