Torture and the Right to Rehabilitation in Nigeria 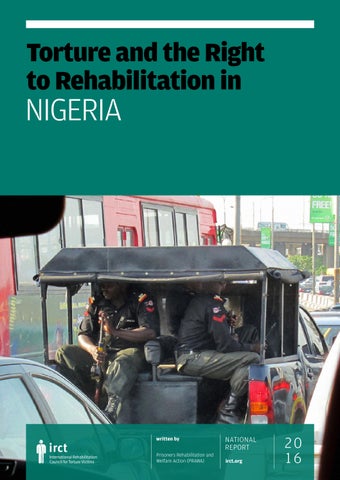 Torture and the Right to Rehabilitation in

Torture and the Right to Rehabilitation in

Introduction Although Nigeria has ratified several major international human rights treaties, torture remains a common tool utilised by security forces for the interrogation, intimidation and punishment of crime suspects. As the public mounts further pressure on security forces to bring an end to the existence of Boko Haram, there has been an increase in the number of reported cases of torture in the Northern region of Nigeria. This remains the case, not due to a lack of awareness-raising initiatives, but due to inadequate facilities, provisions and mechanisms for investigation, regular monitoring of detention facilities, effective oversight and speedy justice delivery. Acts of torture in Nigeria include indiscriminate arrests, illegal detention, infliction of physical and psychological injuries, extrajudicial killings and death while in custody as a result of torture. While the rate of torture and inhuman treatment remains at a considerable level within the country, there is no holistic system in place for the rehabilitation of victims of such offences. The impact of this gap is aggravated by the failure of the Nigerian government to criminalise Torture. Though Nigerian law provides for the right to life and the dignity of the human person, it remains inadequate in guaranteeing effective redress to victims of torture and accountability of the perpetrators.

Torture remains a common tool utilised by security forces for the interrogation, intimidation and punishment of crime suspects.

Torture and ill-treatment in NIGERIA Torture remains a subject of major concern in Nigeria. The most frequent perpetrators of torture are operatives of the security and law enforcement agencies including the police, the military, the state security service, and agents of paramilitary institutions such as prison officers, officials of the Nigerian Security and Civil Defence Corps. These acts are usually perpetrated before official detention, after which, the victims are detained by the security agency involved or transferred to the prisons. The primary objective for such acts is the extraction of information from the victims. Sadly, in some instances, torture is also utilised as a system of punishment, in which individuals with better access to economic resources use agents of the state as instruments of intimidation or coercion. Consequently, in recent times, the incidents of torture perpetrated by non-state actors, either directly or through state agents, has also become a highly worrisome phenomenon.

Rights Training Programme within the Force. The initiative aims to uphold the culture of effective human rights protection within the NPF and seeks to ensure the establishment of effective internal and external oversight mechanisms. Furthermore, there are several agencies with the power to arrest and detain in Nigeria. Each of these agencies have detention facilities within which acts of torture may take place. In response to the recommendations of the 2013 Universal Periodic Review of Nigeria, in July and October 2015 respectively, representatives of such agencies convened to deliberate on various means of ensuring efficiency in service delivery through inter-agency collaboration and coordination. One of the primary outputs of this initiative is the commencement of plans for the development of a national database for all detention facilities within the Nigerian federation. The availability of information on existing detention facilities in Nigeria will ease access to such facilities for monitoring visits and torture documentation.

Supporters of PRAWA signing up to fighting torture and impunity on the ocassion of the UN International Day in Support of Torture Victims, 26 June. © courtesy of PRAWA

Section 34(1)(a) of the Nigerian Constitution upholds the right to dignity of the human person, and Section 28(a) of the Nigerian Evidence Act 2011 (as amended) renders inadmissible confessional state¬ments obtained ‘by oppression of the person who made it’. Nonetheless, these laws are inadequate to protect persons against torture and to ensure effective redress in the event of any contravention. To address this gap, the Nigerian National Assembly passed a new bill in June 2015 to criminalise torture. The Bill, commonly known as the Torture (Prevention and Prohibition) Bill, is now awaiting signature by President Buhari. Recognising the impact of their officers’ individuals actions on the image of the Nigeria Police Force (NPF) the NPF commenced the implementation of a five-year (2015-2020) Strategic Plan aimed at the effective integration of a Human

The situation for victims of torture and ill-treatment Because there are no regular monitoring visits to police stations, prisons and other places of detention, there are no records of the number of torture victims in the country. However, an opinion poll from June 2015 suggested that 50 percent of the Nigerian population would not feel safe from torture if they were held in custody. 1

Whereas torture victims in Nigeria are predominantly male, there a large number of women who are also affected, with many reporting sexual violence as the primary tool of violence used. Furthermore, a disproportionate number of torture victims are poor, and as such are without the necessary economic means to access proper redress for the crimes committed against them and treatment for injuries inflicted upon them.

As a country with a young population, a majority of the victims of torture in Nigeria are young persons who are also the main offenders of violence and conflict within the country. This brings them in contact with law enforcement and security agents, who, in their bid to effectively respond to a rising rate of crime, violence and terrorism, employ maximum force.

The most recognised injuries of a victim of torture in Nigeria are physical wounds, which in most cases are left untreated. While easily identifiable marks left by physical injuries receive attention, little or no attention is paid to other psychological and socio-economic impacts of torture on its victims. Such impacts include loss of employment (caused by inability to perform assigned duties due to sustained injuries), susceptibility to the use of drugs (as a coping mechanism), prostitution, and an inability to function effectively within the society due to trauma or post-traumatic stress disorder.

Victim Stories Mr. Andrew 2 reported in June 2015 to the Social Development and Rehabilitation department of Prisoners Rehabilitation and Welfare Action (PRAWA) in Enugu State that he was tortured in March 2015. According to Mr. Andrew, he was shot in the leg by the Special Anti-Robbery Squad (SARS) of the Enugu State Command of the Nigeria Police Force. After the incident, he spent several days in the agencyâ&amp;#x20AC;&amp;#x2122;s detention facility. In the course of his detention there, his injury was left untreated. Upon the extraction of a confession from him through ill-treatment, Mr. Andrew was transferred to Nsukka Prisons as an â&amp;#x20AC;&amp;#x2DC;Awaiting Trial Personâ&amp;#x20AC;&amp;#x2122;. Given the severity of his injury, PRAWA referred him to an orthopaedic hospital for medical treatment and commenced the necessary counselling services through its torture rehabilitation programme.

National Legal Framework on the Right to Rehabilitation: There is no law criminalising torture in Nigeria. The right to rehabilitation and prompt, effective, independent and impartial medical examination for alleged victims of torture (as provided for in Articles 13 and 14 of the Convention against Torture) is not provided by the Nigerian law.

State Provisions for the Right to Rehabilitation: As a state, Nigeria does not have rehabilitation centres or engage in any rehabilitative measures that would benefit victims of torture. Torture rehabilitation services in Nigeria are only provided by non-governmental organisations.

Implementation targets Given the financial and geographical challenges faced by NGOs offering rehabilitation services to victims of torture, there is need for the institutionalisation of such services by the Nigerian government. In March 2011, the President assented to the National Human Rights Commissionâ&amp;#x20AC;&amp;#x2122;s (NHRC) Amendment Act, which not only strengthens the power of the NHRC, but also gives it financial autonomy and the power to monitor, investigate human right violations, assist victims in getting the necessary care through the public health system and help them seek appropriate redress and remedies. However, despite this provision and as result of inadequate resources, the NHRC has so far been able to offer only legal redress to victims of torture. As an institution with a national reach, there is need for further advocacy for adequate budgetary allocation to facilitate the implementation of the NHRCâ&amp;#x20AC;&amp;#x2122;s mandate, especially with respect to the right to rehabilitation. This will ensure that efforts already made by NGOs may be complemented and made more accessible nationally by the NHRCâ&amp;#x20AC;&amp;#x2122;s intervention. Furthermore, on the national level, efforts to strengthen the provision of torture rehabilitation need to include advocacy on issues relating to budgetary allocation as well as the inclusion of mental healthcare in the Nigeria primary healthcare system. The current law in force in Nigeria - The Lunacy Act - still treats mental healthcare as separate from the primary healthcare system. This fuels the stigma attached to mental healthcare and limits the accessibility of psychological care by victims of such crimes in Nigeria. Presently, 70 percent of African countries (including Nigeria) earmark less than 1 percent of their national health budget to mental health services and anything relating to mental health care, including counselling and psychological rehabilitation in several countries, still suffer from a high level of social stigma. Given the challenge of resource inadequacy, most of the funds provided for mental health institutions are used only in the hospitals and for the treatment of persons with severe mental disorders. There is a need for services relevant to the various forms of rehabilitation necessary for torture victims to be easily accessible. When the state fails to ensure this, victims of such crimes are left to suffer in silence without any form of recourse.

Presently, 70 percent of African countries (including Nigeria) earmark less than 1 percent of their national health budget to mental health services and anything relating to mental health care, including counselling and psychological rehabilitation in several countries, still suffer from a high level of social stigma.

member information PRAWA is a non-governmental organization aimed at promoting Security, Justice and Development in Africa. It was established in 1994 and in 1998 it secured observer status with the African Commission on Human and Peoplesâ&amp;#x20AC;&amp;#x2122; Rights. The strength of the organization rests on its multi-disciplinary team with a wealth of background in research, policy and practice in the field as well as its ability to engage both formal and the informal sector, state/institutional and at individual level and its ability to introduce and implement innovative and high impact schemes. The organization has over a decade and half developed a track record of implementation of research, innovative projects, training and capacity building, documentation, advocacy and provision of support services to vulnerable groups and those in conflicts with the law including women, youths-at-risks, torture victims, prisoners, ex-prisoners and their families utilizing both community-based and institutional/non-community-based platforms.

Notes and references 1 Amnesty International (2015), Torture Around The World: What You Need To Know. Available at: https://www.amnesty.org/en/latest/news/2015/06/torture-around-the-world/ 2

Torture and the Right to Rehabilitation in Nigeria

Although Nigeria has ratified several major international human rights treaties, torture remains a common tool utilised by security forces for the interrogation, intimidation and punishment of crime suspects. As the public mounts further pressure on security forces to bring an end to the existence of Boko Haram, there has been an increase in the number of reported cases of torture in the Northern region of Nigeria. This remains the case, not due to a lack of awareness-raising initiatives, but due to inadequate facilities, provisions and mechanisms for inves - tigation, regular monitoring of detention facilities, effective oversight and speedy justice delivery. 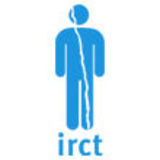