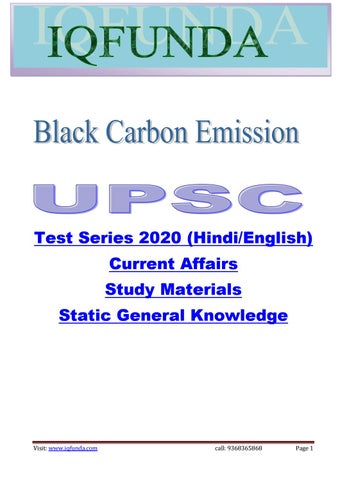 Black Carbon Emission Black carbon is, in fact, a particle or aerosol, called soot. Its emissions are due to incomplete combustion of fossil fuels, biofuels, and biomass. The air is directly heated by its emission. Since it is a component of Particulate Matter (PM), it contributes to air pollution as well as global heating and creates a cloud formation and changes in rainfall patterns and intensity. The program named 'Project Surya' has been started by the Government of India to reduce its emissions. It is a program to promote solar energy-based appliances, under which the use of solar stoves, cookers, and lamps is being promoted. Air Pollution Control National Clean Air Program (NCAP): The Ministry of Environment, Forest and Climate Change has launched a five-year National Clean Air Program (NCAP) on January 10, 2019, to tackle the problem of pollution within a target of five years, i.e. PM2 in 102 cities from the year 2019 to the year 2024. Moreover, PM5 and PM10 emissions have to be reduced by 20 to 30 percent. For this, the year 2017 has been adopted as the base year. The objective of this program is to work extensively to prevent, control and reduce air pollution. NCAP is a dynamic program that will have a scope of continuous improvement with scientific research. It will be institutionalized by linking it with various Ministry of Relations. The program will also partner with leading institutions in the world. National Air Quality Index: The National Air Quality Index (AQI) was launched by the Union Ministry of Environment, Forest and Climate Change in New Delhi on 17th October 2014 as an initiative under the Swachh Bharat Mission. Air Quality Index is a score for the common man to check air quality. Earlier the measuring index was limited to three indicators, while this index has been made much broader by five additional indicators. The air quality index is based on eight parameters (PM10, PM2.5, Nitrogen Oxide, Sulfur Dioxide, Carbon Monoxide, Ozone, Ammonia, and Lead). This index is divided into six categories Good (0 - 50), Satisfactory (51 - 100), Normal Polluted (101 - 200), Bad (201 - 300), Extremely Bad (301 - 400), Severe (401 - 500). Wind Emission Purifying Unit: 'WAYU' has been prepared by the Council of Scientific and Industrial Research- National Environment Engineering Research Institute (CSIR- NEERI). These devices will make the area of 500 square meters of pollution free. These devices clean the air pollutants and active substances present in the air. They also include particulate matter and activated carbon, i.e. charcoal and ultraviolet lamps, which clean the air by absorbing toxic gases such as carbon monoxide. The device has been installed at the intersection of ITO and Mubaraka Chowk in New Delhi. A larger version of the "Air" device is being made by CSIR- NEERI, this large device will be able to purify the air over an area of 10000 square meters. The device consists of a fan, two UV lamps with filters, half KG activated carbon coated with titanium dioxide coating. Environmental Pollution Control Authority: It was notified by the Ministry of Environment in 1998 under the Environment Protection Act, 1986. It is an institution created by the order of the Supreme Court to suggest measures to reduce air Visit: www.iqfunda.com

pollution in the National Capital Region. It was reorganized after the end of its term. It does the national capital. Implementation of the Graded Response Action Plan in the area is also widespread. Comprehensive Environmental Pollution Index (CEPI): This index has been prepared by the Central Pollution Control Board (CPCB) and IIT Delhi. It has been initiated to identify problematic areas in terms of pollution and to improve air, water quality and remove ecological losses at the national level. The Central Government, through this index, finds out which new places can be allowed to set up new industrial units and which areas need proper sanitation immediately. Using the process of this Environmental Pollution Index, 88 areas of polluting industrial units in India have been categorized and indicated. National Air Quality Program (NAMP): This program is being run by the Central Pollution Control Board in 26 states of the country. Under this program, four pollutants SO2, NO2, SPM, RSPM / PM 10 are regularly monitored. In addition, it also ensures compliance with the National Comprehensive Air Quality Standards (NAAQS). National Electric Mobility Mission Plan (NEMMP): Its main objective is to manufacture and operate eco-friendly and high-capacity hybrid and electric vehicles so that by 2020, CO2 emissions get reduced by up to 5%. SAFAR system Introduced by the Ministry of Earth Sciences, it is India's first air quality early warning system operated in Delhi which monitors all weather parameters like temperature, rainfall, humidity, and wind speed and wind direction. In addition to standards such as PM5, PM 10, SO, it will also measure UV-index PM1 and black carbon from the Sun in real-time. The system has been developed by the Indian Institute of Topical Metrology, Pune and was first installed at Chandni Chowk in Delhi. Know UNEP Emissions Gap Report 2019 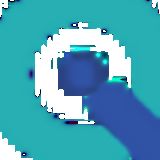