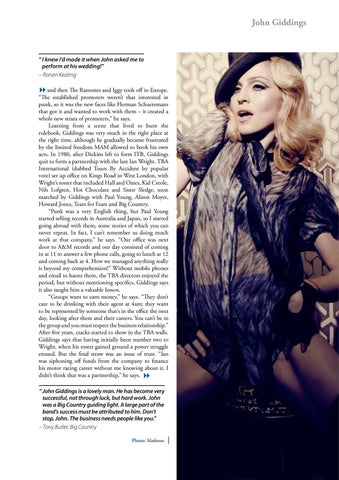 “ I knew I’d made it when John asked me to perform at his wedding!” – Ronan Keating and then The Ramones and Iggy took off in Europe. “The established promoters weren’t that interested in punk, so it was the new faces like Herman Schueremans that got it and wanted to work with them – it created a whole new strata of promoters,” he says. Learning from a scene that lived to burn the rulebook, Giddings was very much in the right place at the right time, although he gradually became frustrated by the limited freedom MAM allowed to book his own acts. In 1980, after Dickins left to form ITB, Giddings quit to form a partnership with the late Ian Wright. TBA International (dubbed Tours By Accident by popular vote) set up office on Kings Road in West London, with Wright’s roster that included Hall and Oates, Kid Creole, Nils Lofgren, Hot Chocolate and Sister Sledge, soon matched by Giddings with Paul Young, Alison Moyet, Howard Jones, Tears for Fears and Big Country. “Punk was a very English thing, but Paul Young started selling records in Australia and Japan, so I started going abroad with them, some stories of which you can never repeat. In fact, I can’t remember us doing much work at that company,” he says. “Our office was next door to A&M records and our day consisted of coming in at 11 to answer a few phone calls, going to lunch at 12 and coming back at 4. How we managed anything really is beyond my comprehension!” Without mobile phones and email to haunt them, the TBA directors enjoyed the period, but without mentioning specifics, Giddings says it also taught him a valuable lesson. “Groups want to earn money,” he says. “They don’t care to be drinking with their agent at 4am; they want to be represented by someone that’s in the office the next day, looking after them and their careers. You can’t be in the group and you must respect the business relationship.” After five years, cracks started to show in the TBA walls. Giddings says that having initially been number two to Wright, when his roster gained ground a power struggle ensued. But the final straw was an issue of trust. “Ian was siphoning off funds from the company to finance his motor racing career without me knowing about it. I didn’t think that was a partnership,” he says. “ John Giddings is a lovely man. He has become very successful, not through luck, but hard work. John was a Big Country guiding light. A large part of the band’s success must be attributed to him. Don’t stop, John. The business needs people like you.” – Tony Butler, Big Country Photo: Madonna IQ is the essential magazine for the international live music business that provides a year-round focus on emerging trends and crucial busin...

IQ is the essential magazine for the international live music business that provides a year-round focus on emerging trends and crucial busin...