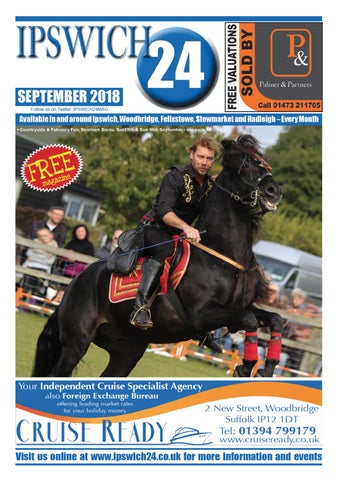 Delight and dragons This year sees Prometheus Orchestra celebrating its 10th Anniversary. A special concert at Orford Church in April marked the milestone and the festivities continue this autumn with a wonderful program played twice over the weekend of 13th and 14th October. First night at St Mary’s Church Woodbridge at 7.30pm and encored the next day in the famed Aldeburgh Jubilee Hall at 4pm. The early years of the 19th century (the concert’s 3 pieces were all premiered in the first 15 years) were colored by the aftermath of the French Revolution and war in Europe. The spirit of revolution outed itself in music too, led by Beethoven, and then joined by Schubert. The two, held by many to be equal and superlative geniuses, had quite soon instigated an exciting dynamic of surprise and shock. A more emo ional and dramatic musical landscape had appeared. Beethoven’s 2nd Symphony abandons the traditional and stately minuet for a Scherzo (Literally ‘Joke’ but not necessarily funny) which bursts out strident chords interspersed with hushed answers and moves at the cracking pace of a bar or even two to the beat instead of the minuet’s steady dance in 3. This is one of the pieces that marks the start of Beethoven’s ‘middle period’. In other words; by now his man has something to say which is totally new, in his own voice and he’s ‘going for it’! The 2nd Symphony is full of these surprises, has tremendous energy and, despite the calm of a beautiful lyrical slow movement, after its first performance in 1803, a music cri ic exclaimed ‘It is a wild and savage dance’.

Another reviewer from the Austrian media wrote ‘It is a monster, a ... wild and writhing wounded dragon. In the finale, before drawing its last breath, he Dragon crashes about crushing convention with a mighty tail.’ The concert begins with Schubert&#39;s 5th Symphony ... a tender announcement and then cascading down to a simple rapturous melody. Written 14 years later than Beethoven’s 2nd Symphony but harking back to Mozart’s time, Schubert wrote in his diary

‘O Mozart! Immortal Mozart! What countless impressions of a brighter, better life hast thou stamped upon our souls.’ This is joyous music and then follows a glowing ’slow’ movement and more delight brings a dance and a bouncing dash in conclusion.

Beethoven’s growing deafness this piece shows no sign of angst, is delightfully simple and yet is a small masterpiece. An elegant and formal theme of great refinement opens he piece, an asser ive statement in the middle but always poised and controlled. It climbs to its summit then tails off gently… And then a drink and ready steady, go Beethoven 2! There will be a retiring collection by the NSPCC following the concerts:

A Celebration of Middy Progress The 26th and 27th August is the last of the line’s normal summer opening programme at Mid Suffolk Light Railway, but visitors will be able to see the progress the Middy has been making this season and the remarkable results the happy band of volunteers have achieved. It’s a real testament to the skills and dedication of the team. •Artist&#39;s impression of how the Middy&#39;s locomotive will look

Schubert expresses his love of Mozart with a tribute to his idol, but the music also has a freedom of emotion that looks forward to the romance of the mid 19th century. Between hese two something different again; the leader of the Orchestra, Michael Dolan, plays Beethoven’s Romance in F. This is a most beautiful work and despite

In addition to the two locos in steam running the passenger services on both days, there will be demonstrations of progress on the muesum’s own locomotive, Hudswell Clarke 0-6-0ST no.1604 which will be run up and down the line to show the newly completed piston and coupling rods in action. Just he boiler to complete! Visitors can also see the beginnings of the clearance work on the extension to Aspall Halt. The latest addition to the Middy Collection, courtesy of member/driver Lawrie Rose is the small Ruston 48 previously owned by Sir William McAlpine. Lawrie was able to buy this loco from Sir William just weeks before he died. No.294266 will be running during the weekend after its complete repaint and overhaul. The importance of this loco to Middy fans is that a classmate was the only known diesel ever to run on MSLR metals and that was during the lifting of the line. The Middy intend to use Lawrie’s 48 in the relaying of the extension in due course. During 2018 several important vehicles have been restored including the TOAD brake van, which was used by Hornby as he basis of their soon to be released new model and the Dennis Mace lorry. Both will be in operation during the weekend. During bo h days there will also be entertainment from local musicians to help the weekend go with a swing. On a more thoughtful note on Sunday 27th the Middy also hope to have a small ceremony of dedication with the Vicar of Wetheringsett for the new memorial to those members of Middy staff lost in World War 1. Eventually the memorial will also list names of volunteers who have passed away since the rebirth of the Middy in 1991.